Detestation-A big white pat on the back 7" 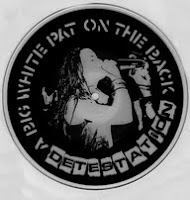 Well, you know the band, you know the record, probably it was posted elsewhere before so there is no need for much blurb and it will be pretty short: A big white pat on the back was Detestation's picture disc, released back in 1998 on Clean Plate Records and consists of two tracks recorded during summer of 1996. The sound is a bit raw but dissent, as always Saira's voice is band's signature, A big white pat... is a high speed thrashing attack with nice basslines, Celtic Frost's Nocturnal has Detestation identity, it is played in their thrashing way and it is a good as the original,(listen the original version here and say what you think), lyrics of their track included in a sheet (check here)
Saira went on in Resolve and now is in Question and Faggot while the rest guys appeared in numerous great bands of Portland scene(Severed Head of State, Hellshock, Warnachine and many many others (Can someone make a family tree of Portland bands, please?). Clean Plate is the label behind a bunch of great releases of From Ashes Rise, Damad and others. Some more Detestation 7 inches are already here:split w Substandard, w Abuso Sonoro, w Beyond Description and the first 7" ever posted here, the Europa '98 tour 7".
Tracklist:
01:A big white pat on the back
02:Nocturnal fear (Celtic Frost cover) 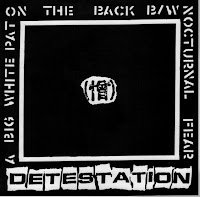 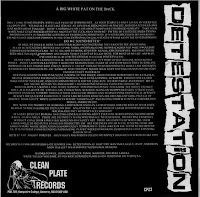 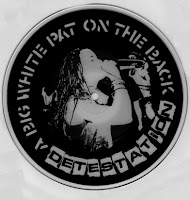 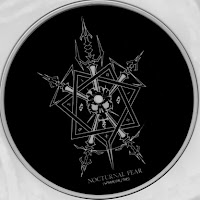 Thanks, I hadn't heard this.

hey man i havent heard it either can you spare some change so i can buy one man? That font on there is way overused man it wuz cool when crass did it.... hey can i have some change to get some new fonts man?

No, I don't know the band. how about a description. You lazy fucker.;)

aha, yeah i m a lazy fucker ;)
if you really want some info about Detestation just follow the links to their previous posts, everything is written there lol lol lol