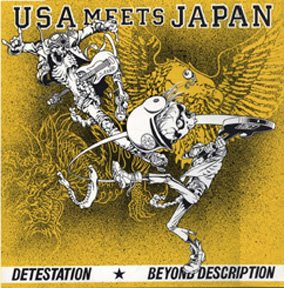 Here's a story from the cold days and nights of November of '98:Detestation were on their European tour visiting my hometown so there was no other place to go that night: So we been there, weather was cold, we had some drinks to warm up, the squat was crowded and everybody was expecting for them. A local band started the gig preparing the place for the mayhem, then the PDX crusties got on the stage and unleashed their sonic Armageddon: I remember they were hyperactive playing their songs faster than the speed on vinyl , no much talking, only once Saira announced a song about animal rights. Suddenly they stopped playing, a bunch of chaos punks tried to enter the squat but the team that set up the gig didn't allow them (because of some bullshit in previous gigs) so some kick n punch shit happened,beer bottles flying in the air and the usual shit. After while the shit was over and Detestation started their mayhem again.
You may say a violent incident like that is common in punk gigs but the story didn't end yet: About a week later and late at night and none was in the squat, some scums caused damages breaking doors,window glass etc. None ever found who were they and why did this and since the local nazi scene was weak and scared to do something like that, then you know who were the first suspects to name....just have in mind that particular squat is not just a punk squat (to "excuse" an act of vengance) but a place where anarchopunks,anarchists,extreme leftists and others i probably have forgot co-exist and create...
The moral? punx fight each other, the squat pays the price...
thats it, no story about Beyond Description..

Detestation/Beyond Description 10" split was released in 1998 on the Amsterdam based Wicked Witch Records, this was the last Detestation release while the band was still active (Profane Existence re-released their lp a few years later), on the other hand Beyond Description started earlier(1988) and they are still active recording new tracks for their 20 years anniversary.
This is not a bad record in any case bad but the sound quality is shit, the Detestation side sounds weak and loses the comparison with their LP, Beyond Description seem to manage it in the same level. I have already said enough, go get it
My scanner 's still dead..blame Whispy not me...
Beyond Description
01:Future - moment
02:Servant
03:Understand
04:Possibility
05:Tool
06:Same
07:Chaos
Detestation side:
08:Nerves
09:Easy way out
10:Tempest
11:Pyre
12:Pentimento 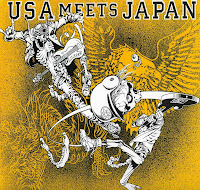 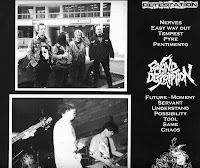 Thanks, you have a great site. I'm just getting into crust, so your site is quite helpful. Keep it up.

hey nekro,where did you find this "Diakopes sti Syro" comp in you blog?
its fucking unknown
u r in my link list dude

Haha. I took that picture of Detestation on the back of the split 10". It was taken November '97 in Eugene , OR.

Anonymous said...
This comment has been removed by a blog administrator.
December 2, 2009 at 1:21 PM