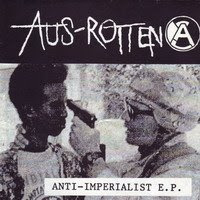 This post was going to be the Police Bastard-Cursed earth but a google search gave many results of distros having it around the globe so i decided to post something else.And speaking of google searches here a story:
It was back near the beginning of this blog,late at night and while i was roaming in the web i made a "7inchcrust" google search and one of the first results was a forum from somewhere in east Europe, i decided to enter there but what i saw was beyond what i was expecting to see:It was a conservative punk forum with this medieval interface, warriors and epic warmonger-like shit and a topic about crust and crust links, there were some 7inchcrust links,some other blog links about bands moving in the anarcho side of politics. Weird? I didn't say anything, their native language was a barrier but having discussed in the past with people with such ideals made me believe that an argument on their "favorite topics" or in general is always a waste of time when faith,divine etc are always stronger than logic and progress of humanity. Conservative punk to me is like a communist being against working class or an anarchist being in favor of authority so no reason to start a discussion, some people have the patience and can discuss but sorry i won't get it. The same night, my only "answer" was this post a few minutes later

Aus Rotten are one of my all time favorite bands, their name stands for "extinction" or something like that in German language" and they chose the German word because in English a name like that it would be a metal cliche. Anti-imperialist" came out in 1993 and delivers David's lyrical Armageddon and a powerful blending of Crucifix and Discharge, there is no need to say anything about the band since they are well known, they somehow continue as Behind Enemy Lines (BEL sound like a modern version of Aus Rotten to me). "Anti-imperialist" was included in their (almost) complete discography"Not One Single Fucking Hit Complete Discography": "...And Now Back To Our Programming" and "The Rotten Agenda" came out a few years later
It sound incredible but in 1999 and during a gig in San Antonio TX with Broken from New Haven, Pittsburgh, Aus Rotten were threatened by some Mexican ultra violent punx for being too leftists and were almost gun targets..
You will find an interview in Suburban Voice zine #43. My scanner is lazy,(Whispy come back you scumbag! i m off, you need to post!) but these cover pics collected from the web seem to be ok..
Tracks:
01:No change, no future, we're lost
02:They ignore peaceful protest
03:This is brainwash
04:Secret police, secret army
05:Apathetic 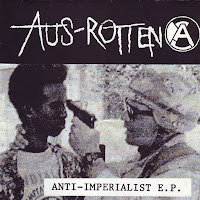 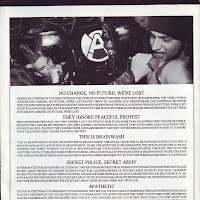 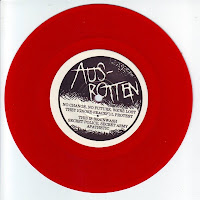 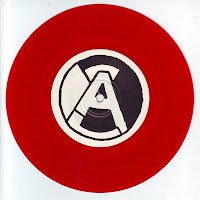 haha that Josh guy from the debate likes to take advantage of the language barrier! But anyway, I responded in that post about what most things in the bible really mean. I used to be extremely right-wing and christian (like any other steriotypical white american) until I actually read the book.
As for christian HxC... like I said in the post, I don't care if it is a genre... just as long as it isn't right-wing in politics and has some emphasis on leftist economics and social justice. There's a difference between Christian punk and nazi punk I believe.
But anyway, great post for a damn good band. Cheers!

I'll be back in a week - until then... tough shit for both of us! I hope to get to Köpi this Sunday to see FxPxOx, though, so there's a chance some more balkanian HC will appear here (assuming they bring a distro w/ them...). Until then, post or perish!

now guess why my band was called eradicate?

b.t.w. I don´t believe there´s a difference between x-tian and nazi bands they´re both full of shit!

Luc(A)s, conservatives were and always are against major capital (the same way they are against working class:Fear the rich and hate the poor thats why there is "social justice" in their rhetoric.But its only verbal perfume to hide the stench, people like these were always the basis for fascist regimes. leftist economics and conservatives is an oxymoron to me the same way some communistic parties have adopted patriotism,i hope you understand what i mean..
this particular forum was patriotic, nationalist,who cares anyway and visitors liked band such as Nausea and Disrupt, make a google search:conservative punk pl and you will find them..its the first result...

Pope, i remember an Aus Rotten interview in another zine the band translating their name as extinction, extermination or something, seems they were wrong..

Well I was just seperating christian beliefs from being attributed to conservative ones. Obviously, the site's conservative and I understand that, and don't support it, but it doesn't speak for eveyone who has religious beliefs.
I mean, in Latin America most the people who were involved and are still involved with the radical socialist movements are religious. Why? Because they were just average, everyday people resisting. The FSLN didn't get set up in Nicaragua solely by agnostics and atheists. The majority of people who participated in the Democratic Socialism were Catholics because that's the historic Latin American religious view. And I have many friends who are incredibly intellegent and just as socio-politically radical as me, except they have Sufi-Catholic beliefs and I'm agnostic.

I'm just saying that having religious beliefs doesn't make you conservative, unless you conform to the status quo and force it upon other people. You're right, that site is full of shit, and there's a lot of other ones like it, but not everything that's christian is conservative or fascist, unless they have the traditional (right-wing) political beliefs and force their ideas on someone.

you are right about Latin America, i just had in mind Europe when i said conservatives are always in the right wing.
Religion is the reflection of political authority in the mirror of divine, a trap that most people are caught because its starts from childhood, it is rooted in the mental area,need more than logic to reject it so people follow it even if it is against their ideals.
Christians are far from what you could call nazi scums but
there is a difference between a simple Christian and an "active believer" of Christ:a simple believer is a result of mind manipulation and he may be an ordinary person, he causes trouble to none and he may be even in the communist area (and in that case religion is not his first priority) .An active believer is in the ultra-hardcore side of religious things having extreme (right) ideals.

hey this is a great site
where are you from
i am curious cuz i live in san antonio,tx u$a
i didnt go to that show in 99 cuz i am not cool and didnt hear about until a month later i dont even know who set it up but i was aware of the primate freedom tour it stoppped in san antonio also cuz there is a big research center that uses animals i passed out flyers and put up posters for the protest but didnt go either
my parents are real strict and event though i was 17 in 99 they didnt let me go out much
i wish i could have gone to the aus rotten show
i heard about it
i heard there was a lot of fights but that is just the way shows were in those days and even worse the more in the past you go its a lot better now but those fights were all skinheads(non racist, mostly hispanic(of mexican or latin american descent) but still only interested in acting tough) starting trouble just for being bumped into and small stuff like that as just an excuse to fight
what i heard about the aus rotten incident was that one punk askedfor and autograph and aus rotten said no cuz were are all equal autographs are for rockstars or something and his friend got mad and said some tough things to make them sign it but i dont think they were really in any danger and yes the punks were mexican but mexican as in american, born in america and even there parents or grand parents born in america but of mexican descent.
anyway i am suprised such a small story found its way to any one out side of this city. i dont agree with getting violent and i do agree with aus rottens beliefs but they could have just signed an autograph its not a big deal

Hi there
i'm from Europe and i have never been in San Antonio, this story was in the old and now defunct site of Broken,in the biography section, Broken played there that night with AR, i had saved the text and goes like this:
" In San Antonio the gig was filled with ultra violent Mexican chaos punks. One the larger Mexican chaos punks wanted to shoot Aus Rotten for being "too leftist". He showed Jim the gun; Jim talked him out of it."
this guy Jim is Jim Martin,the vocalist of Broken, i don't know if signing a autograph is big deal but in any case is a rock star behavior and people with AR ideals will never accept it

one of my favorite punk 7 inches of all time

I got to see AR in Birmingham, AL in 1995... Awesome show. The club was a rickety old building called Tuxedo Junction... Show was upstairs... The floor almost collapsed that night. Awesome...