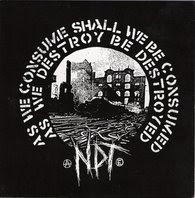 Some years ago a friend asked me if i knew some Danish crusties called Nuclear Death Terror who had just put out a demo tape. I didn't know them,i check their (old now) website, some tracks were there available, my friend sent me their demo and i was stoked by the energy and this Doom/Extreme Noise Terror blending of crust. A new promising band.
A brief biography of band can be found in their myspace:I appreciate the fact that they added my review from Crust-Demos there, adding also the link directly to the post, they seem to have a good taste of humor (or call it whatever you like) since they added also this crappy shit load of hatred and ignorance written by a mindless shithead:

"I understand that this is a hardcore festival, and I understand that local acts need to be promoted as well. But there is a border of what kind of bands the festival should book, and Nuclear Death Terror should be a hundred miles on the other side of that border. They simply suck more than any other band I've ever seen in my life. First of all, their music is boring, growled vocals about anarchy and that sorts, built around three-chord hardcore/punk riffs and repetitive drumming. I can tolerate that to a certain extent, and even though they mostly stood still it shouldn't warrant for a review less than, say, the 3-4 ratings. But when a band has written a song called "Police Funeral", and they dedicate the song "to all the people who fought the police at Ungdomshuset", their rating instantly drops to the worst possible and forces me to leave the show immediately. While I agree with the whole Ungdomshuset ideology to an extent, the whole throwing rocks at police and setting fire at cars is fucking ridiculous and hands down retarded, showing stupidity of the kind you don't normally meet on the street. Contrary to what you might think, you idiots at Nuclear Death Terror, the police is here actually to help you, to protect you from crime. Encouraging people to fight against the police is not acceptable on any level in a welfare country like Denmark. I hope you all get thrown to jail"
The most pathetic piece of garbage review i have ever seen, especially when it is about an outstanding band. I m glad that NDT are open minded and put this bullshit there mocking the hatred and conservative poison some people hide inside them. There is another thing most interesting than the pathetic shit load above and proves that NDT are open-minded people and has to do with selling mp3 on internet or downloading and the argument about how that kills the punk/hardcore/crust scene: There are some diy labels against free music downloads even when a record is out of print, (some of you remember the "scandal" in this blog about a year ago), i understand their stance when a record is still in print, on the other hand there are some other labels completely in favor of downloading or have no problem at all. NDT stand in favor of downloading and they found them selves involved in a mp3 selling on internet (without being asked before), this very interesting story is here, well maybe i m old fashioned and i m against this thing (the mp3 selling) or the scene runs too fast while i m stuck in the past, but as someone commented there "tape trading have always been a part of the scene, nowadays only the medium have changed"...

Nuclear Death Terror offer for free their releases so far: A few days ago i discovered their blog, they offer there for free their 8 track demo (with full scans) and their eponymous LP (with full scans too) promising to put "Ceaseless desolation" 7" there as soon as possible.
Now it time about the demo 7": About a year ago the Stockholm based D-takt & Råpunk Records released a 7" with four tracks taken from the demo (D-takt & Råpunk is the label behind Warvictims and Warvictims members are the people behind Skitlive zine), there is no trace of it in Warvictims myspace (and some other excellent releases they have put out such the new Mob 47 discography are sold out too) so i guess there is no problem posting it here. Actually the only new with this post is the artwork since the tracks can be found in the demo. So what you have in the download link is large scans of front/back/insert/vinyl, then copy paste the appropriate tracks from the demo and there you have it. The 7" came out in typical black n white crust fashion, an insert with lyrics is included
That's it, sorry for the delay Whispy, shit happens
Tracks
01:Cities to dust
02:Life of pain
03:Necropolis
04:Final harvest 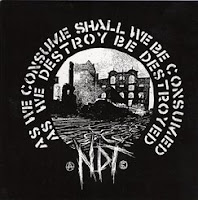 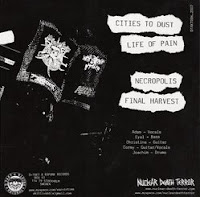 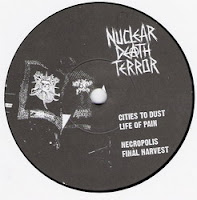 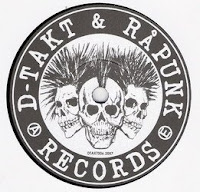 I too saw the bands' blog recently but there was nothing that really moved me so I did not even check the mp3s to be brutally honest, but with your enthusiasm in this post I shall waste no more time!

Hi Tony.
yeah, these people rule! their lp rocks, is the last piece of vinyl i bought in last July along with Skaven/Stormcrow split 7", there must be a limited version of it with (slightly?) different cover

all bands mentioned are killer
love n.d.t.,warvictims,can't wait for the 4-way split
jay

Bit like Slobo, I get sucked in by the review. Good stuff this. Your bang on with the tape trading comment as well. We fought the anarcho wars of 79 to 84 for these ideals! Endless hours of dubbing cassettes and soaping stamps.
Nice post.
J

I managed to miss them 3 years ago when they played at the city I was living at the time. A few months later I was talking to a guy who turned out to be their guitarist but their demo was already sold out. I've found it online but now I'll have the artwork as well!
Awesome band and great attitude on the mp3 downloading issue.

spot on with this write-up, i like the way you discuss the things. i'm impressed, i must say. i'll probably be back again to read more. thanks for sharing this with us.

spot on with this write-up, i like the way you discuss the things. i'm impressed, i must say. i'll probably be back again to read more. thanks for sharing this with us.

it is fabulous to have some great and awesome blog! I was like geez! Can’t wait to share this blog site to my friends the contents are very informative and useful.
pebbles
www.joeydavila.net

Love it! Very interesting topics, I hope the incoming comments and suggestion are equally positive. Thank you for sharing this information that is actually helpful.


Thanks for sharing your article and for giving us the chance to read it. It is very helpful and encouraging. Visit my site too.