One By One - Atrapad@s Por El Fascista Planeta Tierra 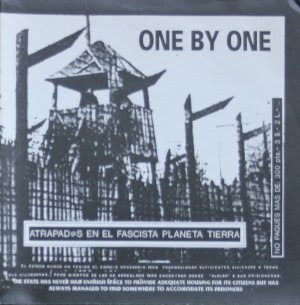 Second majorly-delayed UK post, & this time around I've some One By One for you all.

I could rant about them for a while, but I'll limit myself to a few words & let the band itself (or at least Micky) tell its story here. One By One formed in Newcastle, sometime in the second half of the '80s; that's only partially true, of course, since their drummer Sned was living in Leeds & beating the skins in Pleasant Valley Children. (Remember Nabate's first release? They appeared in it. They also have a discography cd out in Flat Earth Records, which Sned was the cofounder of - go get it!) I don't know when they broke up, but I know that the next link in the chain - Ebola - appeared in 1995. They're also related (via Micky & Sned) to Generic, that unbelievable band whose releases correspond to the first four releases of Flat Earth (the fifth one was the first One By One 7", "World On Fire"). We're talking real class here...

Their discography is a bit of a mystery to me; I'm well aware of the "World On Fire" & "Fight" 7"'s, as well as of the one posted here (duh...). Further, discogs also claims the existence of an LP (which I have no reason to doubt) & Mr. Bacteria also lists a split 7" with Sedition, an unreleased, partially completed second LP, & a radio session... Sadly, I've only listened to the 7" here & to the awesome track they contributed to the Whispers compilation (that's right, another Whispers band appearing in this blog)...

As I mentioned above, One By One gave their place to Ebola (they're far not that same band, but Micky has been in both of them) & Ebola gave their place to Jinn who're still active. I got the Ebola/Jinn split LP (which I cannot recommend strong enough) a long time ago direct from the band (from Micky, in fact) & I still like that record a lot - it seems to me both bands are going someplace where UK bands have not been before all that often... The Jinn split with The Suicide Handbook is also notable, though I admit that I got tired of all the screaming after a while.

That's it for now. Scraps of info, lengthy bios, anecdotes etc. regarding Generic/One By One/Ebola/Jinn are more than welcome here, so thanks in advance to anyone that'll take the time to shed some light on these bands. Meanwhile, here are your links. 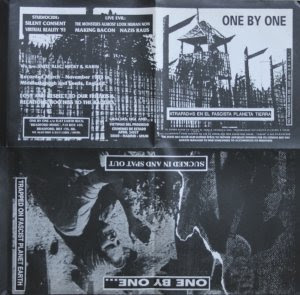 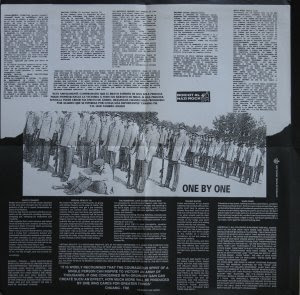 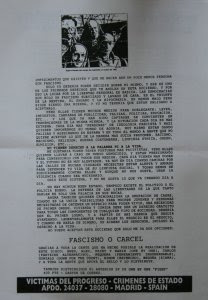 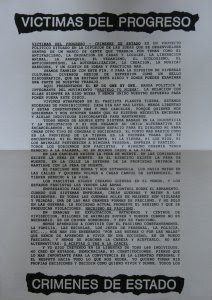 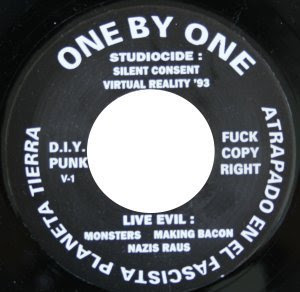 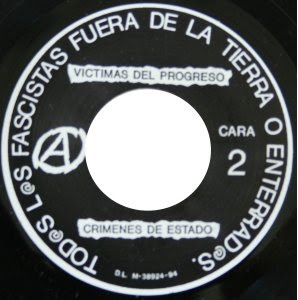 I've got the LP... it came out in 91 or so on Words of Warning Records. Send me an email addy and I'll share it with ya.

The split w/ Sedition is all live material and also features a Doom track (more like a 3 way split?). Not essential.

One By One folks were also in Health Hazard and Suffer.

I loved this band, esp the 1st 7"., and had no idea there was a discography. But I've been to the Flat Earth site and they don't have it listed. Any idea of somewhere else I could get it?

Mike: thanks! I'll send you an email tomorrow!

Nick: yes, their contribution to Whispers, together w/ Angst's & Naytia's track (probably forgetting a couple more), grabbed me the most in that comp.. The discography is Pleasant Valley Children's - One By One have no discography released yet but I keep waiting like crazy for one. Hopefully Sned or Micky will see to it someday...

A truly powerful and singular band! I only have two comps on which they appeared (one which I've posted, and another which I'll post... eventually) so I'm eternally grateful for this!

Oh my gosh! This is soo great! It's like finding a treasure!
Hahaha
Thank You for this

NEW BLOG! come check us out!

NEW BLOG! come check us out!

AWESOME! I didn't know about this release. Thanks! One By One also recorded a demo tape and a radio session for the legendary John Peel in 1991 which Sned very kindly put on a cassette for me years ago along with a few live tracks. I did post these recordings on my old blog about a year or so ago, but as I've just started another music blog I'll repost this tape there if you'd like a copy. All the best Lazy Rod.

Sned and Micky were in Blood Robots before Generic.
I have their flexi split with Reality Control - can try rip it if you like though I'm not good with stuff like that lol but I can give it a shot!

What can I say? If you feel like giving it a shot, please do it! This post already landed me with a One By One discography, if it ends up hoking me up with a piece of history such as Blood Robots I'll be more grateful! Email me for "ripping advice" if you need it - & THANKS!

Does anyone still have the radio session and demo?

Saw them for the first time in august '91 in Liege with Oi Polloi, they were a 3-piece back then. They just released their 1st 7"
In 92-93 saw them lotsa times (mostly together with sedition)with a female singer (time of Fight and the LP)
There is also a split 7" with sedition.
I've a videotape with a liveshow of them (and shows by sedition, hiatus, PJD, Anarcrust, Svart Sno, ........)filmed by Willy Hiatus.
hope to put the fucker online soon
ralf-hypertension