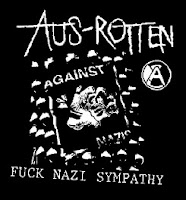 Aus Rotten was formed in early 90's in Pittsburgh, Pennslylvania. They had the direct action of early '80's anarcho-punk and the '90's hardcore/crust sound but what make them stand above the others was their lyrics: Dave Drenga is a great lyricist and his columns (in Profane Existence mag,Sludge n Letuce etc) are thoughtful. AR lyrics was a lyrical armageddon, strong and smart talking straight to your mind and heart about capitalism,religion,sexism,capital punishment, conservative wankery,animal rights,corporation greed etc. Their strong anti-fascist stance was the reason to be threatened (according to a interview in ABC No Rio documentary).
Fuck nazi sympahy was released by Havoc in 1994 and its a best seller ep for the label with more than 20.000 copies and about 10 times was re-pressed. Music wise this is a blending of Discharge with 90's sound plus the lyrical attack that differs the structure of songs from the usual verse-chorus form.
Lyrically this is a blast: Tuesday may 10,1993 is about the massacre in Bosnia and shows how F. Hengel was right when he wrote "what experience and history teach us,however,is this, that people and governmets have never learned anything from history".Vietnam Is Back '94 is an anti war anthem, Fuck Nazi Sympathy deals about nazi punks and AIDS is about the way this disease is used by authorities as a threat. Do You Know Where Their Children are? is a song about all those who close their eyes or turn their face away to the suffering children of third world.
This is still available from Havoc so there will be no link here(despite the fact that Felix is not against downloading)
Don't respect something that has no respect
don't sympathize with something that has no sympathy
don't understand something that has no understanding
Don't give them their freedom, because they're not going to give you yours
Don't give them their freedom, because they're not going to give you yours
Fuck nazi sympathy
A.I.D.S. 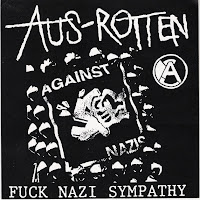 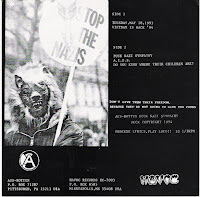 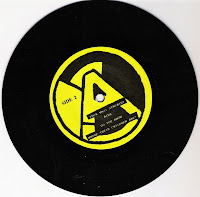 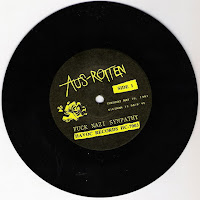 Apparently this link is already dead. Any chance you can fix it? And thanks for an amazing blog, by the way!
/Judge

thanx for reporting this, its ok now

Can this file still be downloaded? I have this 7" but I'd love an mp3 version!

its ok now, i know its been a long time since you report this but PLEAZ, make a comment about dead links in the latest post, not in the old ones.i ve seen this comment by chance and fixed it two weeks later only by chance...:( i cant read all the new commnents in the old posts...