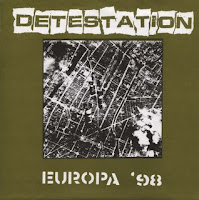 So this is the first post: I saw these guys about 10 years ago when they visited my hometown during their European tour of '98, their set was an ear-damaging blast, they played their songs faster and drums sounded like a airplane engine. This ep was made for this tour and they still had copies of it: One-sided, 2000 copies were made and was released by Consensus Reality Records. I don't need to say much about these guys (and girl) you surely know them, this is a crust blog and all crusties knows these Portland legends. Sometime someone must make a family tree connecting the Portland bands that rose within the wave of great bands of '90's. The ep delivers two tracks, the 40 seconds new song Controls and a live version of Circle the Wagons a track taken from their lp, lyrics included in a sheet.
Detestation disbanded when Saira left the band, the remaining members formed the short lived Warmachine along with members of Axiom. In the next years they appeared almost in every important band that rose from Portland
Check this unofficial myspace, its nicely done with a brief biography. An interview in Profane Existence mag from summer of '97 can be found here, The lyrics of their songs can be found here and here you can check the artwork of their records. 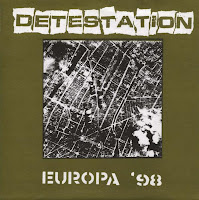 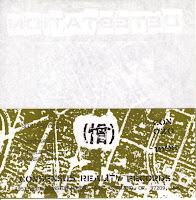 I'm slow as fuck, but I just figured out that Kelly Halliburton playing in The Pierced arrows (Dead Moon offshoot - critical, now that Dead Moon is, in fact, dead!) is THE Kelly who played in Detestation! I mean, woo-hooooooo! I love Dead Moon & Detestation rule, so this is way great! Hope to catch them live sometime...

I think I have a few Detestation 7's you may not have yet if you wanna swing in and have a look.Maybe not quite what you have but maybe worth a look.Awesome blog as well,Cheers!
http://upthefuckinpunx.blogspot.com/

Sorry about the anonymous comment!It was about the Detestation 7's.Clicked the wrong button.

thanks for the comment,i have these ep's.
i had visited before your blog, really nice stuff there, i added you in my link list.
cheers