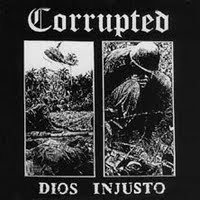 Time for some doomy stuff: The Japanese masters of funeral doom metal released Dio injusto 7" in 1999 on Frigidity Discos. The artwork looks like it comes from a D-Beat / crust band and not from a sludge/doom act, there are two pressings of it, both pressings have the same artwork, the second one has slightly different color. Music wise, this is haunting and pessimistic metal with slow pace: There are two tracks covering the sides and deliver sorrowful sludge/doom with rough and throaty vocals, heavy tuned-down guitar with some mammoth drones while bass is there to feed the slow pace . The guitar lines that rise from the doom swamp are nice and the repeating riff hypnotically appears again and again is sick and heavy.Actually, Dio injusto/Unfair God is one track sung in Spanish and English, side b follows from where side a ends and thats the explanation how they managed to zip a song in a 7".
Frigidity Discos released some of Corrupted records (Paso Inferior and some of their splits). No need to say anything about the band, if you want more infos check their site, their myshit or wiki, some Corrupted posts are already here:Anciano 7" and split w Sloth
Tracks:
01:Dio injusto
02:Unfair god 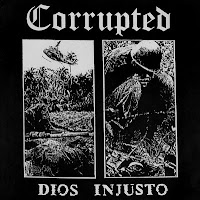 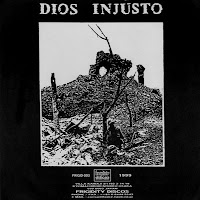 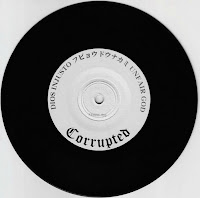 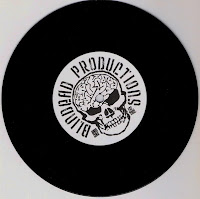 hi people, from Valparaíso Chile, we´re prepparing a new number of CRUDO SOY zine, with interviews, music reviews, texts... we need to know news about your band... new stuff, new recordings, new songs, look for a new member on bands, tours, zines, activities, news on your city's scene... we wait to november 25... send a mail to crudosoyzine@hotmail.com or in http://www.myspace.com/crudosoyzzine