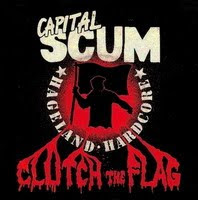 Here's some old scums from Belgium delivering absolute Discharge/Varukers worship : Capital Scum formed in 1983 in Scherpenheuvel and Clutch the flag was their first record, released by Hageland Records in 1986. In 1987 they released Tsjerno kills lp (Hageland) and appeared in several compilations including Extreme Noise tape (Extreme Noise zine, 1984), Alle 24 Goed lp(Punk Etc, 1985), Emma 2xlp(M.A. Draje, 1986) and others. In 1988 they called it quits, in 2002 they came back in action and the next year they released the Freakshow 7" and in 2005 the 100% Guilty cd.
For more details, bio,discog, pictures, etc about them check their site or Kill From The Heart.
Clutch the flag was recorded in Emma, Amsterdam's biggest squat back in these days and delivers five tracks and about eleven minutes of powerful hardcore D-Beat blending Varukers and Discharge. Songs are full of energy, guitar riffs are heavily influenced by Hear Nothing See Nothing Say Nothing era and Varukers ep's, even the vocalist is close to Rat's voice. Nice stuff... There is a sixth track and its just some noise made by the guitar.
There is nothing else to say, go get it
Tracks:
01:Prison life
02:Target
03:Clutch the flag
04:Final nail in the coffin
05:Slavery (deadly laugh) 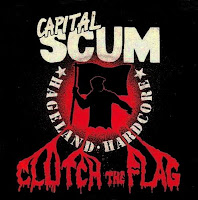 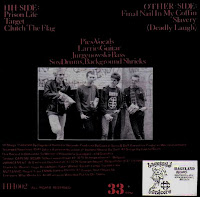 Great band! I must admit that this is the first Belgian band I knew, even before Zyklome A or Moral Demolition.

The sound quality is great in this 7'', as in his "Tsjerno kills" where I feel they take more metallic elements. Btw, it's a great LP too (reminds me Permanent Damage at times).

I've posted the Tsjerno Kills in my blog time ago :)

thanks for the comment Toxik, both CS releases are nice but Clutch the flag is the one i like.
i added the link of Tsjerno kills post, cheerzz