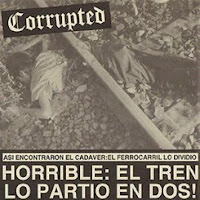 This is the soundtrack of what's going on here:Rain is falling right now while i m typing this, cold wind is blowing, raindrops on my window, there's fog everywhere and dark clouds on the sky, none 's out in the streets, the daytime looks like the twilight just before the darkness fall and the moonless night brings an underwolrd landscape. This started a few days before and still going on. i like it...
Anciano is the first record of masters of doom/slugde from Japan. It was released in 1995 by Overseas and was repressed four times with slightly different artwork, 500 copies for each repress if i m not mistaken . The cover phrase 'Horrible: El Tren Lo Partio En Dos!' is often mistaken to be the release's title. Here we have three tracks (plus an intro) of raw doom with the familiar Corrupted tormenting riffs and brutal vocals, heavy and gloomy enough to bring you down
Corrupted myspace
Wikipedia
Tracklist:
1. The post war dream
2. Si mismo defensa
3. Que cabronada
4. Anciano 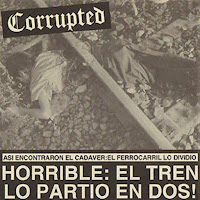 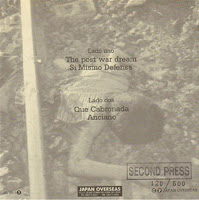 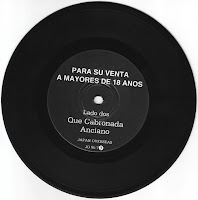 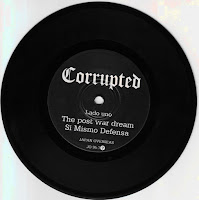 i like it. thanks. very uplifting too! so lets smile & be happy :)

As s'one wrote a long time ago regarding the homeless benefit 7" compilation they participated in, "the news here is that Corrupted managed to squeeze a song into 7" format." Corrupted kicks some serious ass - thanks, dear blog.

I wonder if this is the same Corrupted as is photographed here:

this was the sortest comment ever!!!
so we have photos of the rarely seen Corrupted....
i found Chaos Mongers interesting too :)

Never heard 'em but adding to my "wants list" just in case -along with all the other stuff that Corrupted has recorded..THANKS

Could you re-up all your Corrupted posts please?

hey! thanx for posting it! their spanish singing is not understandable but who cares?