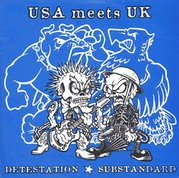 This is going to be pretty short cos i'm busy as can be but i got some little time to post this.
Detestation need no introduction since you are in a crust blog, ok?
Substandard was an underrated UK anarcopunk band in the vein of Conflict and Icons of Filth, formed in 1988, they recorded two demos and four ep's (a own and three splits w Nerves, Pink Flamingoes and Detestation,). This recorded material plus some compilations tracks was released in 2003 by Maximum Noise Entertainment and recently released by Ruin Nation Records.
Detestation/Substandard-split was released by Wicked Witch Records from Amsterdam, Netherlands back in 1997. This was posted in 1000 Aspirines in last spring, actually only the Substandard tracks were there because "Detestation is a crap band". Not any comment on this, here you are going to get the complete record... Music wise Detestation deliver two tracks of their devastating crust and Substandard three anarchopunk tracks much better than what you expect. The cover artwork here is once again similar to other Wicked Witch releases (Hellshock/Effigy-split, Hellkrusher / Preparation-X Detestation / Beyond Description etc).
Jules, Substandard vocalist joined Constant State of Terror , Andy (vox/guit) is in France in a band called The Flue Sniffers and Pat the guitarist went on with Bomb Blast Men and Shithouse. Detestation members... you know where they come from and when they disbanded where they went to, ok? Check Crustcracker for Question's first ep with Saira on vocals
End here, scans are stolen from the web, get it..
Detestation:
1:Day in, day out
2:Sunvalinta (Kaaos cover)
Substandard:
1:For the kids
2:Annihilate
3:Corruption come to light 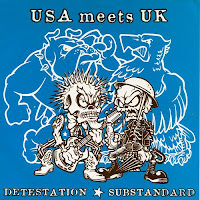 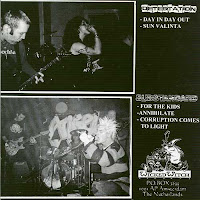 the Substandard vocalist joined the band: Constant STATE Of Terror !

i didn't realize it was wrong and i don't know how this "strife" get there in Constant State of Terror link :/, weird shit...
anyway, thanks :)