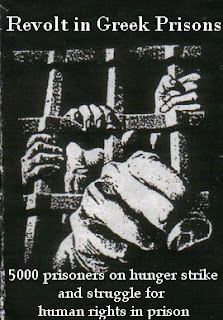 A hunger strike of more than 5,000 prisoners takes place in 21 prison in Greece. The first stage of the prisoners struggle in which 8,000 out of 15,000 inmates took part consisted of refusing food from the prison catering. On Friday the 7, 1,000 of them upgraded to the second stage of the campaign by going on hunger strike. The number of the hunger strikers today (11/7/08) is 5,120, 17 of whom have sewn their mouths.The deafening silence of media keeps this struggle covered up in ignorance and indifference. Prisoners demand a new meeting and discussion with Minister of Justice who tries to avoid it and announces new prison laws that do not solve any critical problem.
In libcom you can see the main demand of prisoners. During the strike, a 32 old man died of drug use while he was in isolation department because he refused the usual humiliation that happens in prisoner's transport. The answer of state in this hunger strike is psychological scare tactics and retaliation helped by media's silence.
........................................... 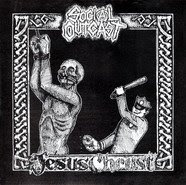 Now about crust: The appropriate record should be the Abuso Sonoro's "Prisoes" 7" , i don't have it but you can get it here. The Jesus Chrust/Social Outcast split was released by Squat or Rot and Tribal War, i dont know the exact year,probably in 1991-92. I don't know much about both bands so here some infos collected from the web:
Jesus Chrust were a hardcore/crust/noise/whatever band from New York, including Neil (of Nausea, Final Warning and Tribal War Rec.s), Ralphy Boy (Squat n or Records, Disassociate) and are also connected with bands such as The Denied, Distraught and Thoughtcrime (Steve Chrust), they released a split (live in New York) tape with Apostates (1990) and a few ep's: A split with Würst (1992,Squat or Rot) , this split w Social Outcast, "Blasphemy" (1990,Fudgeworthy) and "I'm nailed right in"(1991, Fudgeworthy) and appeared in compilations such as Bllleeeeaaauuurrrrgghhh! 7" (1991,Slap A Ham) "Squat or Rot pt2" , "Let's Live Part 2" ep (1989,Ex-Tune Tonträger) and "Benefit for Beer", a 4 way split with The Deviators,The Casualties and The Blanks. They disbanded around 1993.
I don't know if this is their complete discography so enlighten us if you know anything.
Only a few things about Social Outcast: They were a hardcore band from Michigan, they released the "Struggle" double ep (1992,Mass Media,Ding Dong Ditch) and "TV casualties" ep (1993,Bitter Youth Organization), the "Assembly of extinction" split with Feast Or Famine (recorded back in 1994 but released in 2002 by Battlkry Records)
This was a Tribal War-Squat or Rot co-release. Music wise it delivers hardcore and crust in each side. Two tracks from each band, mipaced to fast hc with catchy riffs from SO and crust brutality with dual vocals from JC. Paul, vox of Assuck did the artwork of back cover.
nuff said, go get it
Social Outcast:
01:Our protection
02:Manifest destruction
Jesus Chrust:
01:Law and order
02:By force or by will 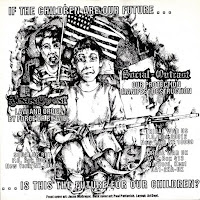 That was supposed to write like, not likw. Write fast or don't. Heh.

There was more than 1 band called Jesus Chrust. The one who did the "Blasphemy" and "I'm Nailed Right In" is from Boston and is more grindcore/noise.
The NY band (this one) also appeared on the 2nd Squat Or Rot comp. 7" and the "Let's Live Part 2" comp. 7" released in Germany on Ex-Tune Tonträger in 1989.

the band on the bleaurgh compilation is the grind/noise one

the NY ones had a great live split tape with APOSTATES but the rest of their releases sucked in my opinion!

and the Boston ones weren`t really good also as far as I remember but had nice looking pic-7"!

Horst, the guy who did EXTUNE TONTRÄGER is quite old now but still around on concerts once in a while.

Malisha 666, thanks for the link.
i knew about a second band called Jesus Chrust but nothing more..
CJ and anonymous thanks for setting things clear

if you're interested in the Boston ones go there:

Hey Malisha, thanks for the links! I don't surf the blogosphere all that much, so I appreciate it when people point out things that I might enjoy :). I loved Dead Ideas ever since I listened to 'Wrong,' & I am the proud parent-ehm, I mean owner-of 'Rejection' (the 12" version). I think I'll put it on right now, in fact...

Is there any chance of fixin' the file this link goes to. I have this on vinyl, but I can't play vinyl on roadtrips, Thanx

link is fixed, thanks for the report,

THANK YOU! Is this the same Jesus Chrust as the I'm Nailed Right In? I read the other comments and had no idea.

any chance you have the Civil Disobedience In a Few Hours of Madness 7" somewhere?

there were two bands with that name: this one here comes from NY and the JC that released "I m nailed.." were from Boston...
In a Few Hours of Madness was posted in the early days of this blog but only two tracks are available cos this is still available from Havoc Records

I first heard this in the 95 from a tape mix sent in the mail, awesome vocals from Neil and Ralphy (both who went on to other great bands).

I have some information about Social Outcast, of which I'm willing to send your way. I have two 7" by them, and I personally know one of their former lead singers. If you're interested, get back to me at david@detroitpunk.org