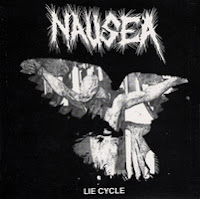 Destitute populations/diseased minds/censored opinions/dwelling on time! Yeah! this is repost of Nausea's classic Lie cycle and there are only a few things to say(repeat) here: This came out on Graven Image Records, the four tracks were recorded after Nausea's European tour (91-92), Amy had left the band before these swansong recordings and Nausea called it a day before the ep come out (it came out in 1993 when they were history). There are four tracks here, a new song, one taken from demo, the new version of a compilation track and one slow and heavy song, about six minutes long that could be written by Amebix or State of the Union. The picture on back cover is from Lucio Fuici's Zombie movie (thanks Scrachbrad) was used by Red Light in the poster sleeve/fold out cover of their 7"), 6500 copies of Lie cycle were made, a few hundreds in neon-green and light-blue vinyl, first 1000 copies came with original Graven Image sleeve, these tracks appeared in "The Punk Terrorist Anthology vol. 1" (Black Noise Rec.s)
Thats the short ranting blurb, for more interesting details check Nausea's page
Tracks:
01:Lie Cycle
02:Fallout
03:Right To Live
04:Blood & Circus 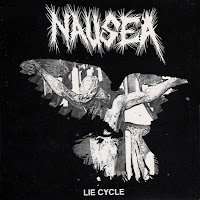 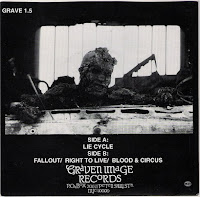 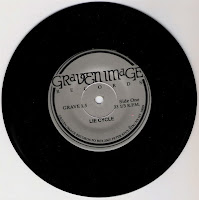 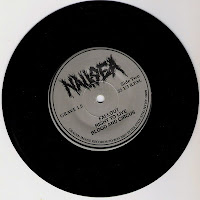 this jewel has not place in a used bin. i can't believe that people don't appreciate such treasures :(

hey billy, i was listening again your greek crust comp and i would like to ask you if you anything from no security and social security...
cheers

The Picture on the back cover is from the first gulf war. It is a real picture. It is Not from a zombie movie