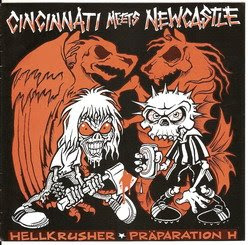 This is an obscure shit i didn't know anything about until Mackie (Cherzz!) send me this piece of rarity. Actually i never heard beofr about this band called Praparation H..
This is a Wicked Witch record, released in 1998 (if m not mistaken), after a google search some infos come up: Praparation H was formed in Miami Florida in early 90's and later moved to Cincinnati, Ohio. The first impression wasn't too good because of band's heavy metal poseur photo, really shit..(but when i listened to their tracks things got a bit better and the photo is just a joke, check the comments and the pics in their websites.) Searching the web i found their web site, but who the hell knows when was the last time it was updated? it pronounces the 'upcoming split w Hellkrusher..' oh my, oh my..
Anyway, they were formed in 1992 in Miami Florida USA. they recorded several demos and their discography includes some splits (w Agathocles, Wadge, Cripple Bastards, John Bender, Hellkrusher), a full 7" and several contributions in compilations. i got discuraged by the first track intro and their photo on back cover but their sonic onslaught is no bad as they deliver some wild shits with screaming/growling vocals and manic drums and guitar works, this style is not my cup of tea but no bad at all.
Newcastle punks Hellkrusher need no introduction, they contribute two tracks of their familiar d-beat hardcore good as always
Hellkrusher side:
1. Vision from the Third World
2. Authority
Praparation H side:
1. Suburban life
2. With violence a fixation
3. You can make me
4. John Ellis 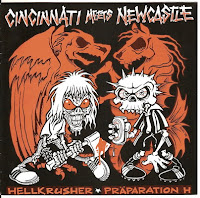 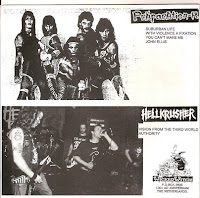 thanks for posting this

In case it's not totally obvious, Prap H just used a picture of some stupid glam band instead of themselves.

you are right! i wrote the text above before i check their photos and somehow i connected the glam shitheads with the hairy axeman on front cover..
thanks Simon, i just edited it..

i totally missed that too! (a sense of irony is not a much valued virtue where i come from :P ) thanks, i was wondering how the hell could a band that sounds like this look like that!...

Oi Billy its Mackie, been gone a while lost ye email..got ye some news on Hellkrusher...REJOICE!!!

Oi Billy its Mackie, been gone a while lost ye email..got ye some news on Hellkrusher...REJOICE!!!

Hi Mackie!! nice to see you again!
i will send a mail as soon as possible

the "dude with the axe" is eddie. its a reference to PH loving iron maiden. the hellkrusher "dude" is wearing a newcastle jersey cuz they from newcastle

In my consideration, the most recommended Bitcoin exchange service is Coinbase.

On Take Free Bitcoin you can recieve free satoshis. 8 to 22 satoshis per 5 minutes.