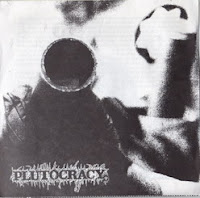 Another piece of brutality, this time coming from Atherton, CA, USA. Plutocracy was formed in 1988 and split up in '93. Their discography includes the 'Snitch'(91) and 'Freedom Denied'(92) ep's, split ep's with Aproctous (90), 976 (90), Phobia,(94), Discordance Axis(95) and two full lengths:'Dankstahz'(92) and Sniping Pigz (01). There is also the 'Progress" demo tape (92). In 1998 Plutocracy formed back to record an album as an honor to Dan "Zodiac Iller" Hogan (their former bassist) who had recently passed.
Snitch was released in 1991 by Whirling Dervish Records and its a piece of heavy and raw brutality with some blasting parts: Deep low growling vocals, slow parts followed by aggressive outbreaks of insanity and angry lyrics dealing with sociopolitics, Red and black vinyl as far as i know...
"School's a tool to be used by society
To push and shove the youth into conformity
Weaving as all into the same pattern
While our true thoughts are being scattered
The constitution does not apply to greed
And where when minerals are found in the ground, greed breeds.
Don't rely on their so-called education.
Educate yourself and FAK THEIR SYSTEM"
(taken from DV8)
Tracklist:
1. Intro & Guilt
2. DV8
3. System overload
4. Snitch 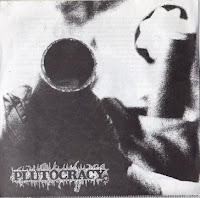 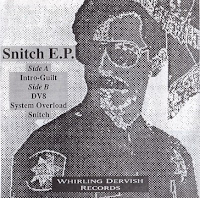 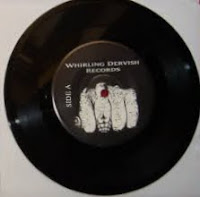 Just thought you should know, I love your work and appreciate what you do for music and music fans. Thank you for the role you've played in inspiring me to create my blog, Post Traumatic Sound Disorder. I have linked your site to mine to show you my support. Have a great day.

so this pretty much my favorite blog ever. i saw this on your wanted list. you can buy the 7" here.

Thanks for the great website, I appreciate just these pictures of this 7", but can you re upload this one? Been looking for it for a while.... Thanks again and keep on going!