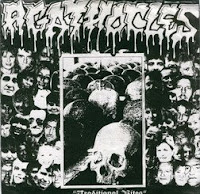 Traditional rites spit was selfreleased back in 1991, AG need no introduction, 5 or 6 new releases in 2007 until now, when are they gonna stop?
Here's a few words about Blood:
These guys come from Germany, Blood was formed in 1986 as a noise core band, they recorded 3-4 demos and in 1989 released their first LP Impulse to destroy, that was followed by two split ep's w AG and Impetigo (1991). During the 90's they released several records (Christbait(lp,93), o agios pethane (lp,94), spit w Dead infection (94), Mental conflict (lp,94), Depraved Goddness (CD, 96), 'Spittle red of blood' (ep,95),split ep's w Mystic Circle (97), Psycho (97) and Inhume (98), in 1999 they released 'Gas flames bones'(cd). In 2001 another split, this time w Warspite was pout out and the 'Massacre' 7" as well. And in 2003 they released 'Dysangelium' (cd)
'O agios pethane' lp is a phrase in greek and it means "the saint died", they probably have a greek member, they have toured with with grindcore/death metal bands such as Fear of God, Dismember, Atrocity and others
Both bands contribute two tracks of old school grindcore, so you know what you gonna get. AG tracks are live recordigs (Aalst, Belgium, Oct 1990)
infos:
http://www.bloood.de/
http://www.agathocles.com/
Tracklist:
1. Dogmatize
2. Twisted bodies
AG:
1. Intro & Theatric symbolization of life
2. The tree 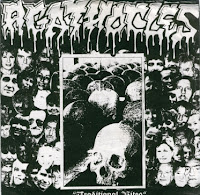 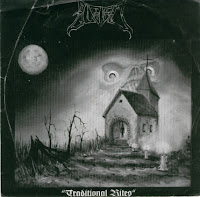 thanks,the agathocles are awesome.
by any chance can you upload the establishing a culture of resistance 7" by axiom if you have it.

sorry i don't nave any Axiom, check Crustcracker for Impaled by Chaos 7"

i have all of these albums

if you want i will upload them and send them to you, jf you give me a week or two.

yeah!they have a greek member,i met him at obscene extreme fest 2006,he is 40 years old now and he is the bass player of blood

thanks Seeinred but i have these records too.. :)
hey Chris, i think Takis is his name, isn't it?

yes, members on this BLOOD are:
Chicken, Taki, Eisen, & Ventilator.
this is be best lineup of they.