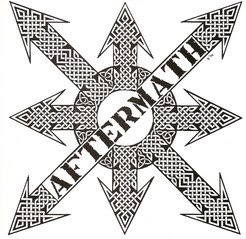 Aftermath were a shortlived crust band from Tyne & Wear, UK (must be cold up there...) with Scotty (of Hellbastard/Hellkrusher) on guitar. The only slab of vinyl i know is "Final Prophecy" 7", which was released by the Amsterdam-based label Wicked Witch. (In typical crust fashion, the label managed to misspell their own address - it appears twice, once in the back sleeve & once in the inner sleeve, with different postcodes in each case...) I've been wondering how I got to own this in the first place - thought it had something to do with knowing that they shared a Hellbastard member - until I remembered: in the early/mid '90s, when I was a total ignoramus as to everything crust, I happened to listen to Axegrinder's "Aftermath" on the radio & it made a great impression on me. Somehow, I thought that was a track called "Axegrinder" by local crusties Mastiga (a Mastiga member was in the studio at the time & he was the one to announce the track); I realized my mistake years later, when I finally saw Mastiga live (their lyrics were in greek, & so there was no trac called "Axegrinder"...) - yet, this didn't answer any questionas about the track... Eventually, I must have discarded Axegrinder alltogether & focused on "Aftermath," assuming that it was the name of the band - & so, I got this 7" from a dutch distro & shat my pants from happiness when it came in the mail (& so when I listened to it). The confusion dissolved when I found the tape I had made of that radio show & heard that the band's name was Axegrinder after all...

Many thanks to Chris(as usual), Mackie (up the Newcastle punks!) and azcrustie, who helped in many ways, this post belongs to them
Tracklist:
1. A dark fantasy
2. Checkmate
3. Final prophecy
4. Across the sea
ps:You can call this either eponymous or Final prophecy ep. There is no front cover title, the cover folds out and there is a "final prophecy" as a kind of title above the lyrics. 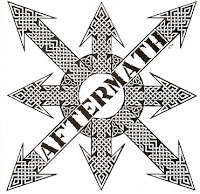 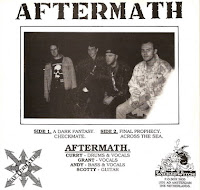 Oi, Doon forget that the drummer on this 7" Curry, Played fer HellKrusher aswell...Scotty is Married with children an Curry is Still Playin, He's now involved with the Legendary Geordie Band "Fiend".....Mackie

thanks Mackie!
Up the Geordies!!!

hey i started a new blog www.stillscreaming.blogspot.com i put u on my links list it would be cool if u could put me on urs..peace thanks...good tunes as well

when did blogs begin to be seen as THE right medium for incessant networking?... c'm'on, you wanna be added to the links, send a motherfucking email & spare us the pain!... (no, i don't own the blog in case you haven't even bothered to check who is - i'm just frequenting it.)