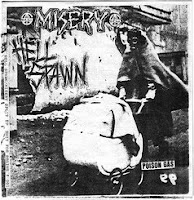 This split was released by Shit for Brains in 1992 and its a piece of raw and brutal crust: Misery deliver another version of Pain in suffering while Hellspawn contribute four raging crustcore tracks. Metallic crust in the vein of Amebix and Axegrinder vs raging crustcore with manic tempos and thrashing guitars. Both sides are great. Good sound quality, black & white cover and insert, limited to 500 copies, there was a green paper cover version with different labels. Discog.com says thats "There are two versions of the record cover: 2-sided black and white folded copy and regular glued cover (also B/W). Came with another folded B/W Lyric sheet.", just to add here that i have seen a b/w copy on eBay including a sticker.
No need to say anything about these Minneapolis legends, here's a text taken from record's insert:
"This piece of shit wuz recorded in Oct 91 in Minneapolis. Hellspawn broke up and went their separate ways, Pignose started Assrash, Huckelberry moved to New York and joined Distraught, Jon and Gary are still fucking it up in Misery"
Tracklist:
Misery:
1. Pain in suffering
Hellspawn:
1. A dying breed
2. Dehumanized
3. Twisted till death
4. Shaddup and slam 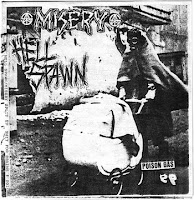 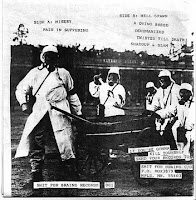 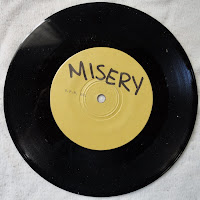 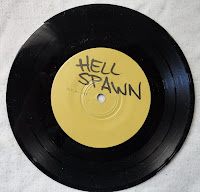 what store do you get your records from? do they have a website?

thanks Chris, and thanks for the infos about it
Seeingred, its hard nowadays to find a record released in 1992 and limited to 500 copies, Misery's web site is (i forgot it,as usual..)
http://community-2.webtv.net/GAGMEAT/MISERY/
they used to have a myspace page but its dead..
and keep you eyes on Minneapolis based Profane Existence web site for the new full length in winter 2007 :)
https://www.profaneexistence.com/index.html

ahaha, the shop where our host gets his record from is called "time machine" & no, they don't have a website (yet). i happen to know he gets in his stolen time machine & goes back to late '80s/early '90s to get these gems - sometimes he brings back an extra copy for me, other times he keeps it for himself much like that ian rankin novel...

in other words, consider the fact some of us are no 16 years old kids (wish i were...) and know about these bands from the old days...this is the time machine...