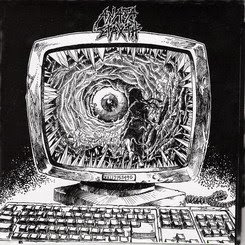 This is cd but it comes in a nice 7 inch package, it looks like a 7" ep, so you could put it in your seven inch record collection,ok?
Ashen Breath (Anasa Stahti) was formed in Athens,Greece in 1992 including members of Isopedosi, Chaotic End, Skatopsychoi(Soulshited), Anaviosi(Revival) and Akros Antithetoi(Radically Against). They recorded and (self)released their eponymous lp in 1994 (DIY Records- DIY-001) which is the first release of Villa Amalias Squat label), they contributed two tracks in the legendary Diataraksi Oikiakis Eirinis (Disturbance of Domestic Peace) compilation (1996, on DIY Records too), they played many gigs in Greece and toured in Germany (1996) and finally split up around 1997-98. Members went on in Anatellon Tromos (Rising Terror), a metallic crust band and recently a new act named Atopia was born.
This cd was released by Punk.gr Records in 2004, is a kind of discography consisting the lp plus the tracks from the Distarbunce of Domestic Peace comp. I had a copy for free of this from Tasos, the guy who's behind the label and the legendary and now defunct punk.gr website. Punk gr Records also released the Panikos and Naytia discography cd-r back in 2002
So, what we got here? Metal influenced crust with aggressive riffs, harsh vocals, fast/midpaced tempos, hard beating rhythm section with many tempo changes, strong political lyrics and good sound production. Lyrics deal about isolation in the modern world, religion, thirst for power etc in a personal and poetic view. The guy who sings was the first vocalist of Chaotic End
CD's artwork is taken from the lp, the cover folds out and becomes a poster with lyrics texts, translation in english and artwork theme for each track connected with the lyrical content. An interview in the "Audiatur Et Alter Pars" Zine is included as well
The vinyl is out of print and if you ever find a copy then the price will be a pain in the ass.. its sad the fact that they recorded only nine tracks, they could have done much more...
Tracklist:
1. Sta granazia tou avrio(in the gears of tomorrow)
2. Kelia aniparksias(Cells of non-existence)
3. Katalipa agapis(Remainders of love)
4. Katadiki(Conviction)
5. Pehnidia eksousias(Power games)
6. Zoi en tafo(Life in grave)
7. Epithanatios kinonia(Dying communion)
8. Ta parasima tis lithis(Decorations of oblivion)
9. O anthropos ton poleon (Homo Metropolitanous) 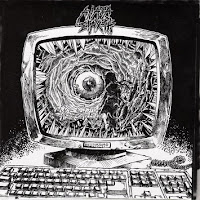 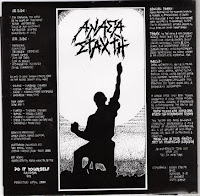 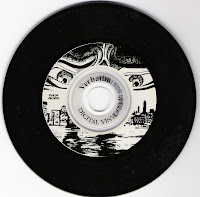 Great job Dude! I was looking for this stuff.Keep up the good work.
:-))

you can download the Burning of the brain-discography cd Here
the cover artwork is here
tracks 1-2 come from Disturbance of Domestic Peace comp.
tracks 3-4 from st 7"
tracks 5-6-7 from split with WWK
tracks 8-9-10-11 & 12 from their mcd
these tracks come from official releases, there is a demo tape included in this cd, you can download it here"