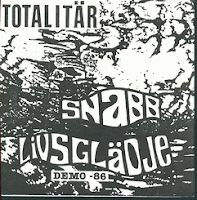 There is no need to say much about these living legends from Hudiksval,Sweden. One of the greatest bands of swedish scene, they were formed in mid 80's and still going on... 20 years of history with many records.
Snabb Livsgladje is a demo tape from 1986 and was released as 7" by Finn Records in 1991. It is also included in the 'Wallbreaker' CD along with other late-80's recordings. So, here they deliver seven tracks of their familiar d-beat crustcore with harsh vocals and catchy riffs
Check their old website for infos about the old days. Finn Records has released some great records of Disfear, Excrement of War, Uncurbed and others 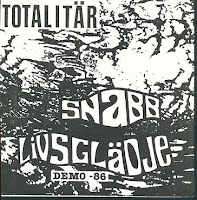 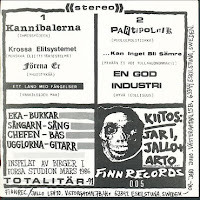 By the way, speaking of Wallbreaker, do you know where the last 10 tracks on that CD are from? They don't seem to correspond to any release in the period covered by the collection. Any idea?

Thanks and loving the blog as usual.

Hi -k
goos question but i m sorry i can't help:checking the tracklist in Discogs, some tracks seem to be the same, probably in altered versions but i don't own the cd, so...