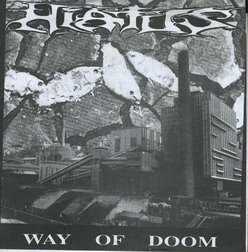 Hiatus was formed in Belgium in 1989 and disbanded in mid 90's. The recorded two demo tapes (The frightening men's story in 1989 and In my mind,1990) and their first official release was the s/t ep (Urban Alert,1990), it was re-issued as I dont scare easily but.. 7"(Nabate/Mother Peace, '91) and was followed by a split w Reach a Mental Road from japan (1991, MCR) and Way of Doom (1991,Profane Existence). The next year a split w Embittered was released on Desperate Attempt and in 1993 a split with Doom another split with Subcaos from Portugal and a third with Fleas and Lice saw the light of day.
From Resignation to Revolt was released in 1993 too on Sound Pollution. The next years the band released El Sueno De La Razon Produce Monstruos(1995,Nabate),Old Fashioned Shit For Consumers cd(1995,Ataque Sonoro) and the Brain lp (1996,Skuld Releases), there is also the El Sueno+the Brain cd released in 1995 by Nabate RecordsHiatus were heavily influenced by Doom and Extreme Noise Terror and that what they deliver with Way of Doom:They sound like infiltrating Discharge in Doom filter in a Swedish hardcore factory. The first track is slower and works as an intro, and then follows the crustcore attack. According to Profane Existence Hiatus members were not satisfied with their poor lyrics writing in English..
Tracklist:
01:Entombed universe
02:Devastation of life
03:No religion (ptII)
04::Way of doom
05:Inertia
06:Freedom conquest 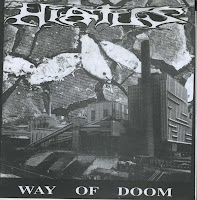 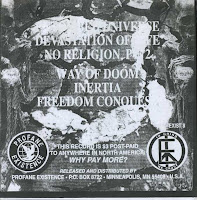 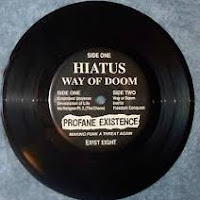 Great band, seems to be one of my favorite crust bands along with Doom. Thanks for the post!

Hey thanks for this! I like Hiatus but think they're best heard over a 7" rather than lp and this is one i don't have so cheers!
Zeroid

Zeroid as being a member of the band :P (wishful thinking...)?