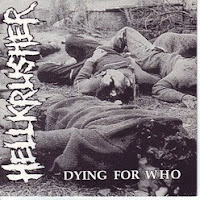 There is no need to say much about these dudes: Hellkrusher was formed by former members of Energetic Krusher and Hellbastard, (so from both names Hell-Krusher was born).They released several records in '90's and some stuff is posted here:Fields of Blood 7"(1994,Skuld Releases) split 7" w Praparation H (1998, Wicked Witch Records). The rest of their releases are already posted on blogoshpere: Buildings for the rich lp (1993,SMR Records) a split 7" w Disclose (1994,Bloodsucker), Doomsday hour lp(1996,Skuld Releases) and Wasteland lp(1998,RKT Records), check this video shot from a gig at Byker,UK
Dying for who? was released in 1992 on Tribal War Records and its a page that could have been written back in 80's by Discharge in their Book of D-Beat. There are five tracks here, side a tracks come from live recordings and side b are taken from Buildings for the rich lp(1993,SMR Records), an insert is included with lyrics and infos about the recordings.
Many thanks to Chris and Colin foe their help
Tracks:
01:Hellkrusher
02:Smash the trash
03:Destined to die
04:Dying for who
05:Scared of schange 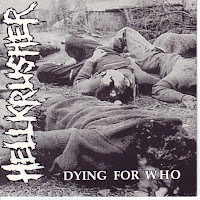 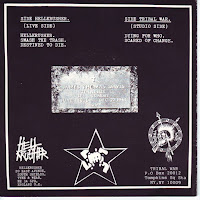 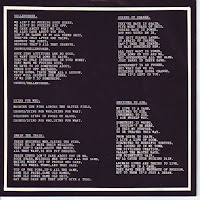 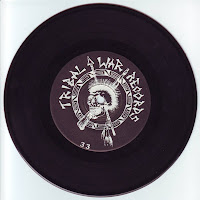 Once again, you've done it again! Thanks for this posting, I've been trying to look for other Hellkrusher stuff for a long time.

Me too! And even though I don't leave a comment everytime I come here doesn't mean that I am not overtly keen on this blog. Keep 'em coming! And naturally a great cheers for all the really fast comps plus eom demo!!!

Hellkrusher was awesome. Always wished someone would release a discography CD for this band. I've got tons of their old vinyl stuff but I never listen to it because I never have time to fuck with vinyl anymore!