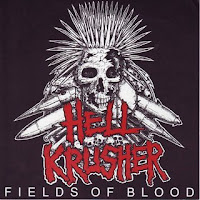 This is a hardcore storm coming from some veterans who carry a crust history in Hellbastard and Energetic Krusher and here they have turned into pure D-beat maniacs: Fields of blood was released by Skuld Releases in 1994, about 4300 copies were made, 3000 copies included a poster sleeve and 100 copies had a patch. Most copies were in black vinyl, there were light-blue, neon-green and red copies too.
There are four tracks here blending some metal hints and thrashing parts with the D-Beat of Varukers in the vocals style under the signature of Discharge feeling.
Enjoy it. If you want some more Hellkrusher ep's check the split w Praparation H and Dying for who
Edit(spring '09):Hellkrusher are back in action, they formed back and played some gigs in UK. 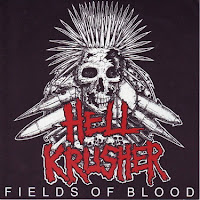 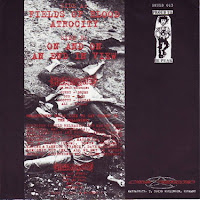 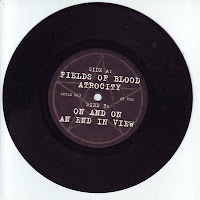 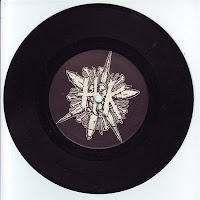 Don't know the owners of these two blogs, but someone is into plagarism..

I'm enjoying both of ya, thanks!

i dont know if you believe me and i dont care if you do or don't:i wished so many times since i started this blog, i wished i had never use this name,ok? thats the truth,i dont care what you think about my honesty and i don't wanna hide behind my little finger,thats the fucking truth.
but despite the name i m not clone, just check the posts and see it.

I just found about this site and other good one few time ago, and i've been checkingsome other older blogs too. I have to say what you do here is great, i love it.
Now about the Hellkrusher, wonderful band that i had pleasure to watch few times, specially now that they made a reunion to play last june
http://www.youtube.com/watch?v=hGp1Q0rWz44

anonymous, i still have to understand what 'plagiarism' means when it comes to blog posts on the web. is copying the content of a post plagiarism? (esp. when it's so easy to google for the 1first line of this post; if you do which, by the way, you'll see that - surprise, surprise - (pieces of) the exact same post also appear in other blogs.) i'm not convinced somehow - maybe b/c, in the end, i doubt any of this matters one-single-bit; big deal if s'one wrote their own hellkrusher post or copied it from s'place else... that's only *my* opinion of course. i still appreciate this blog *a lot* for all the work that goes into it. period :P.