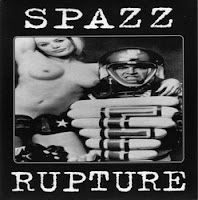 This is the worst cover artwork on this blog. Isn't it? Definitely yes and if not then Rupture is the most nerdy band posted here but at least the artwork is not as shit as Elektra Complex cover and their later "fuck off" attitude. Aussie freaks Rupture started back in late '80's ans they have a large catalog of releases under their belt,just check their myspace and discog site, we have met Spazz before in their split w Brutal Truth,there are some details there about the connection with other powerviolence acts, 625 Thrashcore and Slap A Ham Records.
This is a hard to find blasting record released back in 1994 by Sludge Records and both bands deliver raging stuff, full of speed, power and wrath. The recorded material gets the credits so there 's no space for complains about the cover artwork. 3 test pressings were made and only 500 copies were pressed. Enjoy it and leave the fear of red to horned beasts!!! 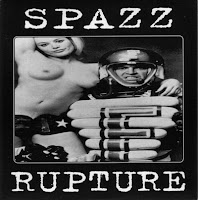 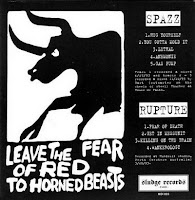 no it´s not the worst coverartwork! to be honest: I like it! didn´t know spazz shared the bed with rupture! cool post! AMEN!

Nice post, man. Not the best material of both bands, but pretty enjoyable. By the way, does anyone know where I can get the corrupture 10"?

Nice Post, any chance of some more spazz, The Jeb 7"

this is actually one of the best artworks on this blog. much much better than usual idiotic bombs/corpses/skulls/doves/barbed wire/bulletbelts cliched crust covers! nice blog by the way - lotsa cool stuff (deformed conscience, masskontroll, hibernation, skaven...). keep up the good work!
roman

Cover is actually a still from a 1970 film, a French anti-American satire called Mr. Freedom by William Klein, which documents "the spectacularly unheroic exploits of Mr. Freedom".

I really love the cover ! Both bands kill in my mind.

I've been told the press was only 350, does anyone know ?

link is fixed.i know i came i little late but i hope you will see this comment.