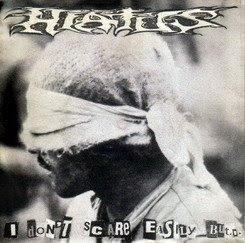 A scary keyboard sound opens the record and a bell tolls singing the requiem to the survivors of nuclear apocalypse, then some guitar noise and a slow atmospheric crust intro that turns into the Doom/Extreme Noise Terror inferno of "Nuclear world", and the journey into the nuclear nightmare begins: Cruuusstttt!!!!
No need to say much about Hiatus: You probably have met them here in their split w Subcaos and in "Way of Doom", "I don't scare easily,but.." was their first official release back in 1991 and the Extreme Noise Terror influences are here obvious more than ever. It was released on Urban Alert Records from France and it was repressed on Mother Peace/Nabate with one new song (track 7:War is obscene) replacing "Elvis" the last track on first pressing. Nabate distributed their "In my mind" demo and released some of the Hiatus records.
Here you got the second pressing and 11:30 total running time of ENT/Doom influenced crust, these tracks are included in "Old fashioned shit for consumers" cd comp(Ataque Sonoro,1995)."Elvis" is a few-seconds-joke-song just like the joke songs they used to have (they did such short-as-fart songs in "In my mind " tape)
Check wiki for their biography,(here) ,Crust-Demos for their first demo and this live tape and Mad Blast of Chaos for the split w Doom
Tracks:
01:Intro & Nuclear world
02:No answers to lead me
03:A day
04:Show of pain
05:No religion, no cult, no sect !
06:No use
07:War is obscene 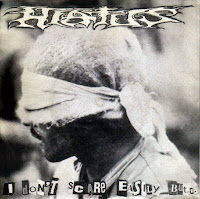 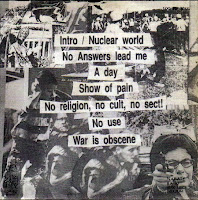 Hiatus is scary good on this one. I love how you link up to other posts too. Thanx for your efforts.

Yup, I have the original pressing and "Elvi$" is a joke song. It sounds like something they recorded when they were really drunk and stoned at the end of the recording session.

I love this record! Thanks!!

Giving it a go. Thanks for your efforts.

This demo is awesome. Thanks for posting.