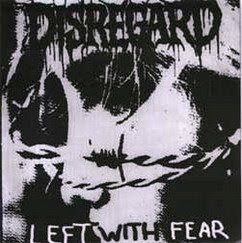 Here's two Dis bands coming from Sweden so there is no any no doubt about what they deliver,ok?
"Left with fear/...And the darkman smiles..." is the only official release for both bands and it was released by Distortion in 1995. I have never seen any other record of these bands, they just contributed songs in several compilations.
Disregard formed in Nassjo Sweden in 1993 and apart from this split they offered tracks in " Distortion to hell..vol 3" and "Icing" cd (1995,Wounded Rec.s). Disfornicate came from Tranas, they formed around 1993, they recorded some demo tapes and contributed tracks in "Extreme Close-Up,vol 2" (1994, MNW Records),"Icing" comp, "Things start moving" (1996,Fetvadd records) and in "Swedish HC" (1998,released by HG Fact). Something remarkable here is the fact that they used a drum machine in the first demo recordings...check this interview on Sniffa Lim(!)
Both bands recorded their tracks in autumn/winter of '94, Disregard recorded their part in the infamous Unisound Studios, a sleeve was included with some misprints though:"Who loves the poor" was a Disfornicate demo track but the lyrics appeared in this split... ,the sound quality is excellent and if you are into Discharge d beat then this is for you..
Disregard side:
1:Left with fear
2:Victims of war
3:Wide open eyes
4:Gore, fear and horror
5:No way
Disfornicate side:
1:New age prophets
2:Captain trips
3:Doomsday art 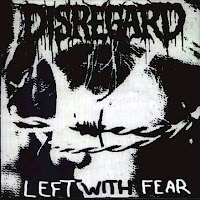 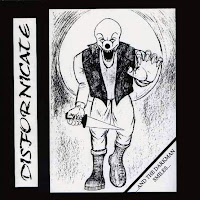 if I remember correct disforNicate is the band/one of the bands ACTIVE MINDS were talking about in the title of the DIS IS GETTING... 7" as there is no word like disfornicate in the english language! that was in a PROFANE EXISTENCE interview I think!

Thanx for this two dis-pieces!!! Cheers!!

Actually they mostly dis (ha...) Dischange in that interview - i just fished it out & have ink running all over my fingers, haha! - but they mention Disfornicate. The piece in question goes like this:

With DISCARD, it was fun. And the first one in England was DISASTER which was fun. I remember putting a gig on for them and doing the DISCHARGE logo because I thought it was fun. But have every other tape you get sent through the mail with these words they've just made up. DISFORNICATE-it means fuck all-it's no word. They've just taken a word and put dis on the front of it.

A great interview, too! All the pieces about vinyl-vs-cd (argument: rec. player breaks, use rubber band to fix it; cd player breaks, must send it to corp. HQ!), about Hammy, & about touring by train - good stuff.

Lets see: when this came out I instantly felt like puking. The artwork is shit, one of the bands have a damn drum machine, the other is utterly devoid of any finesse...Lol. Can't say I have changed my mind much today, except that I kind of like the drum machine bit...I read an old interview with the band somewhere...can't remember...maybe I am wrong. Anyway, I am snagging this for my "archive" of Dis-core!