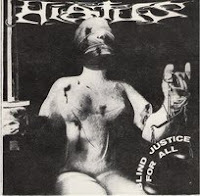 I always remember this comment made by an anonymous guy some years ago:"Post some bands that sound like Doom and Disrupt!". Well, here is a split with two bands that sound like Doom and almost like Disrupt: This piece of crust came out in 1992 on Desperate Attempt Records, Hiatus from Liege, Hellgium, need no introduction, some of their records are already posted here (and hopefully some more will be posted soon) so there is no need for some ranting about them, a detailed history there is in their previous posts plus the fact that they were well known and more or less you already know them. What might be new to some is that they are back in action and they have played some gigs
Embittered were from UK, they were active in early/mid '90's, they recorded a couple of demo tapes and released some nice records before call it quit in 1996/97, members were involved in several other bands, here's the saying of Ash, member of band:"Embittered did an earlier demo than 'And You Ask Why' with me on bass, Bri on vocals, Darren (also of Malediction) on guitar and Dave on drums. For "You Ask Why..", Anth joined on 2nd vocals and Sean took over on guitar. Next up in 1992, we did a split ep with Hiatus from Belgium before touring Europe with them and Sweden's Svarts Sno. Gus then replaced Sean on guitar and we recorded a split Lp with Dystopia. Our final recording was an ep called Choked (listen it here and here)featuring even more new members including Mark and Shaun from Malediction. After Embittered, me, Bri and Dale formed Manfat although I left after a year. Bri and Dale then went onto John Holmes and are now doing Goatspeed. Gus joined Hellkrusher, toured America with them in the mid 1990's and never came back home! I've since done 5 year stints in Sawn Off, Boxed In, War All The Time and, as of last month, Deaths Black Riders" (this was written in Errorizer forum).
Rob, one of Embittered vocalists (he sang on "Choked") passed away the last winter a few days before Christmas from a heart attack.... 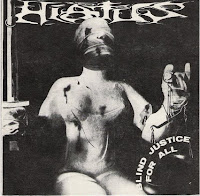 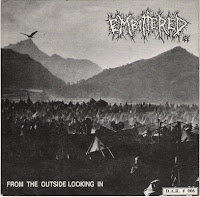 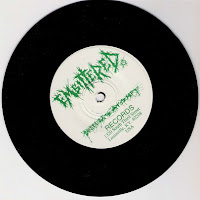 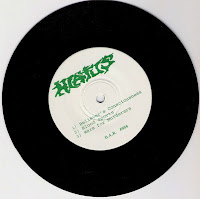 hey man nice one, hiatus is fuckin excellent.
mind if you add my blog too? youre in mine since i started it!

hey!Hellbender is already there,i added you some weeks ago.

sorry, i just checked and youve added me, thanks!!

i dont know if youve been following these things, but im happy to say that the 5 anarchist who've been in jail here in argentina the past 10 days or so for protesting for Giannis, have been released last friday!

Honestly i didnt follow these particular things and i was a bit confused with the five arrested anarchists:i heard there were some anarchists there arrested but i believed it was because of their solidarity for the Greek demonstrators and not for Giannis, anyway they are free and this is good news...

yes, thats te most important. it was on solidarity for giannis, most than all, but the most important thing is how the state and the media manipulated everything, and its yet surprising how quick they got out as the judge in charge of the whole shit processed them for "political arrogance", which has nothing to see with solidarity and/or anarchist ideals....

i have read they attacked against Greek embassy, (or this happened in some other country? i didn't follow what happened abroad cos here many shit happens and things are shitty as it can get.media and government try to manipulate too and to speculate if is possible,some recent gallops tell that 50% of (brainwashed)citizens want the austerity measures,this is ridiculous and just the outcome of brainwash from media.

it was not an attack, i dont know how you call "escrache" in english, they took flags, some paint bombs and thats it, the tv and shit started saying that they threw molotovs wich is not truth, and there are 2 injured cops, wich at least one broke his finger by hitting one of our friends. anyway, im pretty sure that the media & government manipulate and brainwash and lie over there as everywhere else around the globe, but well, its nice to stay as conscious as one can.
well, the Greek crisis is similiar (but worse) to the 2001 argentinian crisis, i hope things get better as soon as possible, dude. cheers!

by the way, i have to say that im getting kind of desperate for Consume's lyrics, can anyone help me?

if i ever find this lost dvd with Consume's live shot i will send it to you via mail. right now i dont have any Consume ep, i hope i will grab one some day. Fugitive Equilibrium posted their split with Hellshock, the guy rips the vinyl and scans the covers so you have the chance to see somew of their lyrics,give it a try
http://fugitiveequilibrium.blogspot.com/2008/06/land-of-eternal-stench.html
the shit here is deep.i was watching this part of video about the crisis in Argentina and i felt a deja vu: Menem and Greek prime minister did exactly the same shit,their promises were lies...politicians can not walk free in the streets anymore:in several cases citizens attacked them verbally and they had to runaway to escape.
i really like this moronic politically correct discussion, these days this is much better than any discussion about music in the spirit of "get over it" ;)

youre absolutly right. im sure whe understand each other as we are crisis buddies.... heh

well, thanks a lot for the link, im downloading as i tipe, i hope it has the lyrics, altouthg its a pitty because that split has only 2 consume tracks (stormclouds blows my fucking head)
ill keep searching, i NEED those lyrics, it cant be like this, Consume is my favourite band but i dont know what the fuck theyre saying!!!

ah, i had another questiom heh, do you know when will be Deathraid's next LP out???


well,talking about politicians, i dont know how greek justice works, but here it is fuckin rotten, this fucker MENEM will die in his bed, of oldness, while he broke an entire country and has something to do with the AMIA bombing, selling weapons illegaly, and other stuff. the least he and many others should get, is a verbal attack.....
but well, thats how it works!
i hope you and your people do all right, man!! cheers!!

well,if i try to count the major financial scandals of greek governments of the last decade i will spend many hours of typing. From Athens Stock Exchange scandal of 1998-2000 (when many people lost their property) to the tsumani of scandals of the previous government (that was the reason of its collapse along with the financial situation) in all cases one thing is the same: none ever was responsible for what happened,nobody ever got to prison. Justice system is full of laws that allow politicians to escape when things get hard and every field of political system is corrupted:ministry officials,justice system,health care system,the army,everywhere there is corruption and a very close co-operation with the high class of business scums... and now the plague IMF is coming to complete the drama.
the truth is everyone (the citizens) knew or at least was suspected of whats going on but everyone's reaction was "oh brother,leave the way it is,who cares?"....

sorry,i have not idea about Deathraid's lp....

yep. thats the reaction until this shit happens. well, in argentina's case, in 2001, the people got out to the street, but the thing is that the middle class felt a hand in it's pocket and it was almost the first time that got to the streets to protest. half the conuntry is comfortable while they dont mess with their money/status/incomes or whatever, and that is what happened. a pile of bullshit, corruption, lies, and maffia that was cooking itself for years, started boiling, and thats when everyone got to the streets to unleash their anger. its kind of sad it has to be that way. people are completely blind, knowing it or not, until someone messes with their money. nobody cares for the one next to them, much less somebody under them. thats the way things were and are, and i dont think argentina is the only place where this happens. but i know that here, people dont give a fuck for what goes on around. its a reeeeally hipocrit society

this is what is going to happen here:middle class is going to lose a lot of money/income from wages,pensions and new taxes, that's why they got on the streets.the lack of solidarity is everywhere and in longtime strike cases some parts of society rise against those who strike (it happened here in farmers strike, teachers strike etc).
IMF's financial policy is already a reality in Hungary and Estonia but the there is not any single word on the news about whats going on there...
the hypocrisy in all its greatness:greek gov has no money but has spent 3 billions in weapons during the last six moths,(money that were paid to France and Germany, countries members of EU)and then signs the loan of 120 billions with loan interest over 5%.great!...

grose.. im sorry, my english isnt good enough to explain what i feel about all this. specially when things go way beyond understanding.
yeh, and im very familiar to those cases. the thing is that here, those parts of society no longer rise against those who strike, now, if you scream for your rights you are no longer heard..
anyway, that doesnt mean that slowly, this is becoming a police state... or is it already? if you yell, you are not heard. if you yell louder, you are smashed in your head.
i hope mistakes and history lets the greek people get out of this shit safe, and i have to say that all the world has something to learn from the greek people. there's a complete lack of unity everywhere. lets just hope (or not only hope) things get better.

uehh long conversation, dude! at least i can practice my english a little more..! cheers again!

police state..this is another story that we should discuss some other time.
yeah,a long conversation but really interesting.hope to talk to you sometime again. cheers

Hi guys, i'll ad some things.
yeah, here all the media declaring about molotov cocktails and the rest (also some solidarity actions for yannis took place also in prague etc).
it's terrific that the five comrades are "free" and outside the walls of jail. i ain't talk about the crisis 'coz i'll have to push buttons until jesus christ's resurrection. haha.

here you can read a column of yannis dimitakis (in english) about solidarity in general (and more specific how people show their solidarity towards him).