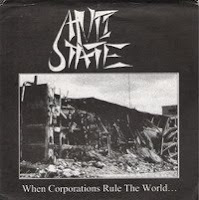 I know only a few shit about Anti State: they were a hardcore band from Portland, they were active around 1998/2000, they released two ep's on Gasmask Records: When Corporations rule the world and a split w Estado de Paz, members went on with Moral Hazard, i don't know if these two releases are the complete Anti State discog, please write some lines in you know anything. Gasmask Rec.s was a small label based in Portland, it is not related with the myspace'd labels with the same name and back in early '00's they released records of Axiom, Anti State, Moral Hazard and Chupacabra.
"When Corporations..." was recorded in summer of 1998 and was released the same year (not sure about this), it comes in gatefold cover with a political text related to record's title and lyrics printed inside and a twelve page booklet including an excerpt from Michael Moore's book "Downsize this!" from 1996 and detailed explanation of lyrics. Lyrics wise the band has done some great work, interesting and informative enough it can make you sit down and read it. Music wise it delivers five tracks of rough and dark hardcore with tempo changes from midpaced parts to fast outbreaks and dual shouted vocals, sometimes they sound like a dark and crusty version of MDC (there's an anti-McDonland's song here ('Vile horrendous McCrap' dealing the same shit with 'Corporate Deathburger') 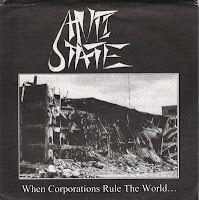 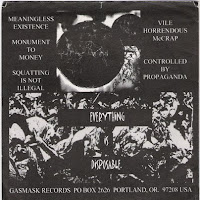 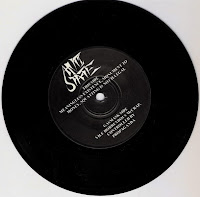 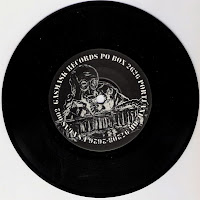 ps: General strike paralysed Greece yesterday (05/5) and the protest in Athens turned into battle. Riots broke up and demonstrators tried to enter the parliament, three people who were employees of a bank are dead after protestors attack against the bank, (a bank employee witness the lack of fire safety mechanisms in place and other shit made by bank management). Many cars and buildings were burnt, many people were arrested. Government and a right wing party tried to speculate by accusing left wing parties for encouraging riots,media named anarchists as murderers, Exarcheia Square and anarchist social centers were raid by the police,This was the first huge protest against the new austerity measures of neoliberal financial policy driven by IMF and EU...
Greek gov. voted the new austerity measures today (06/5) incl. rise of taxes, pension and wage cuts and some new shit about education and insurance system as well while some new measures are in the works for the near future. Bank workers protest today in memory of the three dead. Check Fifteen Counts.. and After the Greek Riots for more infos, next weeks and months are difficult as big shit in the ass...

Sad, sad, sad, sad.
Fuck!
i made a post about your ps.
if you want add anything inform me

just wondering if you could spread the love and add my blog, im just getting started. drunkasfuckexistence.blogspot.com

you are added Will(A), i m sorry i forgot to add you before

i bought this expecting something in the crust territory but this is rather MDC related hardcore than crust.good record...

Wow, this was my band. I'm Daniel, the guitarist for Anti-State. We were trying to be a crust band (my favorite bands at the time were Detestation, Destroy!, Code 13, and Hellnation) but I can see how it sounds like we were more influenced by MDC.

Thanks for posting this!

Hi Daniel,thanks for the comment, to be honest i was expecting something in the crust territory when i bought this,the artwork the political lyrics, even band's name and record's title smell like crust.never mind,this MDC driven hardcore is nice too!
cheers!

Dan. This is Brian, I played bass for a little while with you guys. I used to ride the bus out from NE to Brian R's house - still have this record - found it at 2nd ave. after I stopped practicing with you guys. good (brief)memories. First time sober since then - those times stand out though. hope all is well.