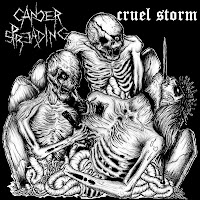 Someone requested "more Italian crust" some time ago, well here is some Italian stenching crust and D-beat: Both bands come from Italy, this split is a new release (it came out in 2009) and almost out of print. Thanks to both bands for allowing to post it
Cruel Storm is a four piece D-beat act, they formed in Cesena and apart from this split they released Clerical Nightmare six track tape on Goodbye Mankind distro/label, some tracks are on their myspace page. Stenchcore crusties Cancer Spreading formed in 2007 in Modena and recorded Stench Core Scum demo tape that was followed by a split w Children of Technology, the split w Cruel Storm and a 12" split w Disköntroll. A new 7", a split w Drunkards and a contribution in a Sore Throat tribute the future plans
The split came out in 500 copies on a co-operation of a bunch of labels (Nuclear Chaos, Last Decay Rec.s Goodbye Mankind, Poseido Rec.s, Blasting Ressurection Prod, Death Crush distro, NKTN Rehorz). Each band contributes two tracks: Cancer Spreading deliver two anthems of heavy metallic stenchcore with dual guitar attack, fast beat that sometimes turns to slower yet steady and powerful and deep low growling vocals, the sound quality is excellent, this is a great piece of stenching crust in the vein of Deviated Instinct. Cruel Storm offer two tracks of raw D-beat that reminds of Anti Cimex with distorted guitar, yelled/shouted vocals and fast bashing drums, their sound is raw and distorted and delivers the goods. The gory artwork is misleading since this kind of shit is usual in grind/goregrind bands, the record comes in gatefold cover with lyrics (in Italian) for both bands.
Many thanks to both bands and esp. Gabri who sent the record, cheers 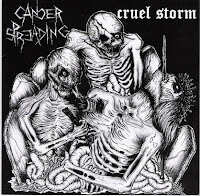 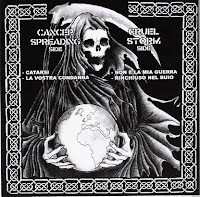 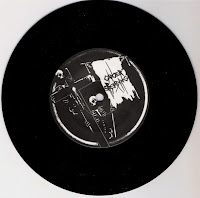 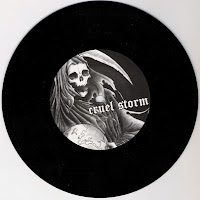 post detestation's "the inhuman condition" with the coolest review ever

by the way, is it possible to get some Consume live stuff? tracks, vids, whatever..

Thanks! The Cancer Spreading side totally kills. Check out or add my art/crust blog: http://www.gostworks.wordpress.com

Thanx a lot for every thing mate!!!