When the discussion is about grinding crust then the first bands that come to mind are Disrupt and Destroy!, i have the mood of noisy shit lately and since the guy from MNPunk blog keeps trolling 7inchcrust for Minneapolis based crusties here is some more noise for him (and all of you)
Disrupt come from Lynn, Massachusetts and Destroy! was born in Minneapolis, both were active about the same years (both bands started around 1987-88 and called it a day in mid '90's) and their music shit was similar: Brutal, fast, noisy and grinding crust with growling/yelled vocals so both bands fit nicely in a split like this. There is a lot stuff about both bands on the web, for more infos and details check Disrupt's myspace or run down the back pages of this blog and Destroys' site and myspace fan pages (here and here).
There is another Disrupt/Destroy split, the cd on Relapse (1994) including the tracks from Refuse planet and Total fucking chaos ep's. The 7 inch classic was released in 1991 by Adversity Records and Break The Chains (Adversity Rec.s stands behind Deformed Conscience's Constant strife 7") and in the beginning a band named Namland was supposed to included but for various reasons was left out. Disrupt tracks were recorded in February 1991 at Headroom Studios in Boston (the songs from Refuse Planet were recorded in this session too) and also appear on the side A of Rid the cancer bootleg (along with tracks from split w Resist) while Destroy songs were recorded in summer of '90 at Underground Studio in Minneapolis.
Destroy are fast and ferocious without reaching the levels of Burn this racist system down (their best recorded material ever) but good enough, Disrupt move in their usual pathways and deliver the goods as usual. The record comes in two gatefold pieces including lyrics and some information about the labels and Adersity zine, front cover artwork is a picture of riots in South Africa, vinyl is black but there were copies in gold vinyl and red cover.
Both bands tracks appeared in discography compilations: Discography cd of 2004 on Dead and Alive and in The Rest of Disruptdead boxset of Relapse (2007) for Disrupt and Necropolis cd(Sound Pollution, 1995) and Discography cd on Havoc Rec.s. for Destroy
i said too much...go get it and say something.
Disrupt side:
1) Pigs Suck
2) Smash Divisions
3) Eat Shit
Destroy side:
1) Stop Thinking and Follow
2) Obedience
3) Defiance
4) Yuppie Beware 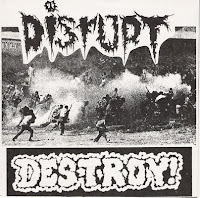 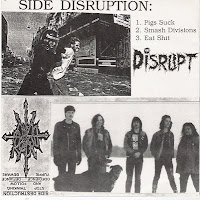 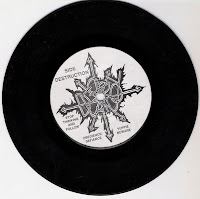 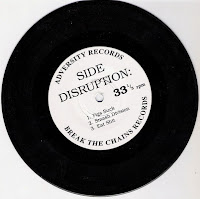 thnx for this! one of the greatest bands ever.

thanx, "one of the greatest bands" what band? there are two bands here :)