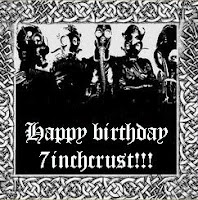 Yes,we have birthday! We are growing and getting older, We are becoming one year old and thats the story: It was March 22 of 2007 when a new born punk baby blog came to this world, the very first post it was this salutation and very soon the same night, a fiendish blogger named Slobodan Burger discovered it and made the very very first comment and the same time he made a post about 7inchcrust in Total Fuzzy.
In these twelve months we had our ups and downs, moments of joy or disapointment and much time was spent in front of a pc screen. we would like to thank all of you who have our blog on you link list, all of you who entered here and made a comment,saying a few encouraging words or adding infos or whatever, all you people who contributed records and all of you who spread the existence of our shitty blog with one way or another. Many thanks to all. We don't know how long this trip is going to last but you gotta be sure we are not going to give up since there is your helping hand.
And i always say "we" because no matter if i m always in front line, we are two scums here and later in this spring Whispy will have a come back. 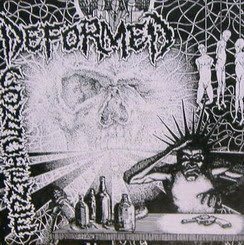 Deformed Conscience formed in Connecticut USA in early 90's. You have met them here nearly a year ago in their eponymous(a.k.a. Indian giver) 7"."Constant strife" was released in 1993 by Adversity Records, it came out in gatefold cover with lyrics,including an insert with thanks and hello's and consists seven tracks and eleven minutes of crustcore.
DefCon material still in print is the "Hagen Days" discography double LP (Unrest Records) including "Constant strife" and a bunch of DefCon releases:"No excuse for suffering' Demo, the st 7", the split 7"s w Scourge, Terminal Disgust and 3-Way Cum & comp. tracks
Their eponymous demo tape is not included there but you get it here
Jon from Deformed Conscience and Jay Stiles from Disrupt formed State of Fear (along with Pete from Defcon on the first S.o.F. EP)
Tracklist:
01:Constant strife
02:At a loss
03:Segregated scene
04:Uphill battle
05:Another struggle
06:Closet fascists
07:System of chains 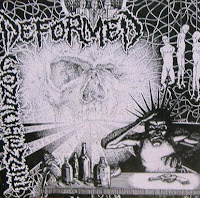 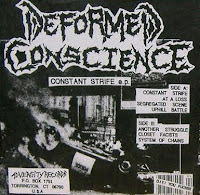 Now a few shits about what's going on here: We got the government's attack against the working class through the reform of the social insurance system, claiming that it targets to the financially privileged workers but if you take a deeper look you will see that the "privileged workers" term includes the entire private and parts of public sectors and the same time prepares the road to the private insurance and healthcare system:New increased age limits, dark future for working mothers and uninsured workers and comparing the today's conditions, less pension to those who will not die working and manage to get to their late years.
If you want more just go there
If you think news like these shouldn't be here, then...
sorry for making heavy the atmosphere but punk is not just music....
Posted by 7inchcrust at 3/22/2008

happy birthday! did I tell you already that 7INCH CRUST was the main motivation for me to start AM I MEAN? if not, I told you now!

I just discovered your blog recently, but I've been enjoying the posts immensely so far. Happy birthday, and thanks for your effort.

Happy birthday to one of my favorite blogs! And what better way to celebrate than with a band that i really love! I haven't found much DC online, so it's great to see this 7" up.

Keep up the great work you're doing on this blog. It's much appreciated!

PS: I'm still hoping that Only in it for the Music isn't down for good. Anyone know what's going on there?

Hippy hippy to all the 7"crusties!!! May a billion 7s fall from the sky!!!

Why why why, why but why not?

Happy birthday!
Great blog and great taste.
This 7" was supposed to be one of my next posts.
Up the crusties!

Congratulations! Thanks for the great tunes, man! Cheers!

Fuck yeah, I think we may have started around the same time and I'm glad to have been iFriends with your blog. Cheers and more fucking years.