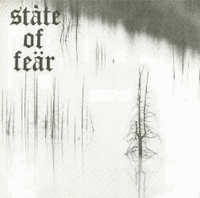 The debut st 7" (a.k.a. Shroud 7") from State of . They were formed by Jay (ex-Disrupt) and Jon (ex-Deformed Conscience) and released three awesome records, the st 7", Wallow in Squalor 7", and The Tables Will Turn...lp , before band's demise in 1997 (in 2001 they came back in action for a US tour).
Comparing to the later releases, the stuff here is a little bit raw but thats not problem. There are seven short tracks that last about ten minutes and deliver fast Scandinavian crust with the usual elements of dis-crust in guitar works, fast drum beat, nice bass that sometime sound too loud and gives a sick feeling, screamed/yelling vocals and political lyrics. The sound is raw,solid and crunchy and fits with the genre and let the band deliver the goods. This was released by Reiterate Records in gate fold cover, it was re-released by Aftermath Records in 1999 and was included in their Discography CD/LP on Profane Existence, 2004.
State of Fear exist no more, Jay now is in Deathraid, Check this site, there are photos, lyrics of all tracks and interesting interview. 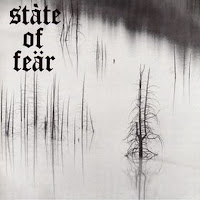 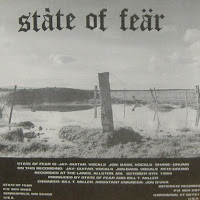 Beautiful record, more Deformed Conscience styled on this release than on the other releases. Cheers on a good fucking blog.

Thanks so much for putting this up. I finally have all the SoF tracks now. You're doing great work with this blog... Seeing so many good posts in a week is pretty awesome. I especially appreciated the Disrupt 7"... i love the band and i only had the tracks from Unrest.

Keep it coming and I'll spread the word! Thanks again.

Link is not working.

damn, link is not working

Thanks so much for this. This record was the shit. Everything these guys touched was golden. Keep em coming