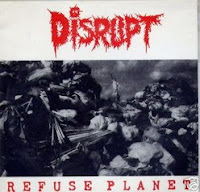 Not much to say about Disrupt, you already know them, check their Myspace if you like for more details. Refuse Planet was recorded in January 1991 and belongs to the bunch of noisy crust Relapse releases of early '90's (same a Destroy or Exit-13 7"s). As it is expected, this is a piece of grindcrust brutality of 8 tracks for approximately 9:10" of ferocious and violent grinding crust with dual vocals(low growls and screams), chaotic grinding riffs, blasting drums and fast rhythms with some slower parts. The production is noisy and appropriate for this sub-genre, the lyrics are political as always. Did you expect anything different? Nuclear Blast distributed it in Europe and MCR Company in Japan. This was was included in the cd discography released by Dead Alive Records in 2004 and in Relapse s' The Rest, 2CD discography in 2007 (along with demos and live recordings)
Tracklist:
1. Subject to suffering
2. No values
3. Inebriated
4. Refuse planet
5. Game
6. Consumed by the system
7. Dog eat dog
8. Suffocation 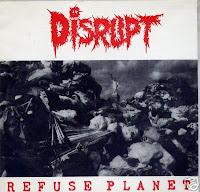 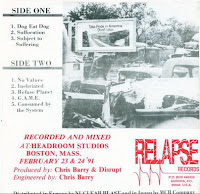 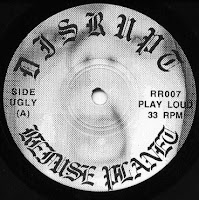 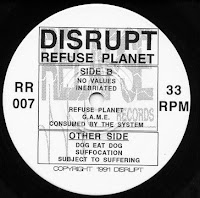 sorry but no links for Relapse Records