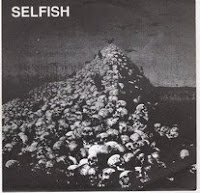 Every time i see this record i remember a well known label mentioning in their site in the trade section: "No trades with bands that have artwork with corpses or pile of skulls" or something like that. Well, this ep has a pile of skulls but is also great so it should not included in this rule in case of trade lol lol lol.
Selfish started in 1989 in Turku, Finland and included people involved with Forca Macabra and Uutuus, they became widely known with the release of split w Doom on Ecocentric Records in 1994. System kills is their first record released back in 1993 by Genet Records. There are four tracks here of powerful and noisy crustcore, two of these appeared also in Pro-Life control/Tear silence into pieces split lp. Vinyl comes in a simple gatefold cover and there is nothing mentioning the title of ep (thus this is a st ep, System kills is the title of first track). Vocals are acid screams and remind of Japanese noise acts, drums bring basic beat lines in fast pace, guitar reflect the blending of UK and Japanese hardcore, sound is raw and noisy and lyrics included on back cover.
Selfish moved from crustcore of their first ep to a more traditional Japanese hardcore and became a kind of "Japanese band from Europe" the same way Burial is today, their discography includes a bunch of ep's: A split 7" w Disclose (DIY Records, 1995), a Japanese Tour 7" (1997, Otto Itkonen Productions,a label run by Selfish/Forca Macabra members), The Joy of the Industrial Society 7" (Genet, 1998) a split w Liberate (HG Fact,1999), a couple of lp's/cd's: Burning Sensation lp/cd (Ferald Ward/HG Fact,2001), Cause Pain (Ferald Ward/Combat Rock,2005) and some compilations:Flashback cd (Pain Killer Rec.s, 2001), Cry for Love, Cry for Death cd (Deadalive,2002). According to their my space "A new album entitled "Life has no vacant time" has been recorded and will be released on Feral Ward late 2010 " 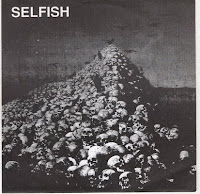 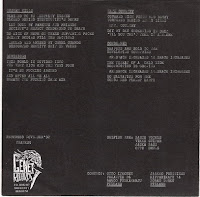 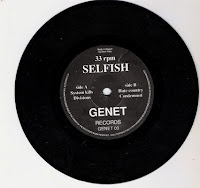 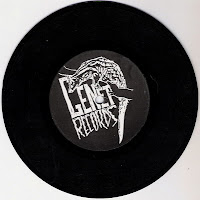 one fucking day and no fucking comment...
com'on you guys...don't be stupid-here we have one of the best finnish bands straight outta japan (at least in the next releases).
i have buyed the split 7'' with Liberate 10 years ago...killer art-killer tunes

thanx Mike,it would be great to post the split in Fifteen Counts..

nice work in putting this together!...keep it up!...

thanks, i read they dont include early selfish on their discography because it is different from the burning spirits style they went on to

Hi there, 7inch! Nice to read this summary. Just wanted to let you guys know that the LP "Life has no vacant time" was finally (pheew!) released in May 2013. Thanks for your interest -Angeleyes