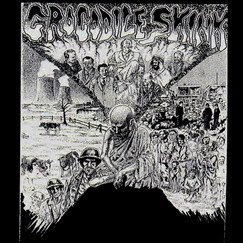 I m feeling a bit weird while typing this after Whispy's last post and all these infos and details because i know only a few things about Crocodile Skink. But lets give it a try while waiting for Kaaos/Svart Aggression and these mysterious three UK ep's..
Crocodile Skink were a four piece Tokyo outifit, they formed in 1990 and disbanded in late 90's (around 1997-98), they formed their own label(Crocodile Skink Records in which their selfreleased the split with Swedish punks No Security,we ll post it here sometime, hopefully), some members were also in a band called Snowline. The rest of their biography are unknown to me so if you know any further info just make a comment and say it.
Their discography as fas as i know is:a split 7" with No Security(1990, Crocodile Skink Records), the s/t 7"(1992) and a split 7" with Forca Macabra(1996,DIY Records). They also appeared in "War"CD comp (1991),"Animal rights" comp.tape (1993, and obviously its another release and not this compilation posted by Fugitive Equibrium),"Tokyo crusties" 7" and "Chaos of destruction III" comp-3xLP (2005), there is also a demo tape, strangely recorded in 1995 and not in their early days. These releases plus some previously unreleased and live tracks, minus the demo tape are included in the 38 track discography cd released by Tribal War Asia Records

The st ep came out in 1992 on Asia Records in recycled paper and consists four tracks of crust and japanese hardcore blending. The rhythms are midpaced to moderately fast, the recording is heavy,harsh Japanese vocals and if they remind something, this is a crusty mix of DON DON and Damnable Excite Zombies.
Thats it. No more to say, go get it..
Tracks:
01:State bustar
02:Genitalia
03:Once take back
04:Revolution 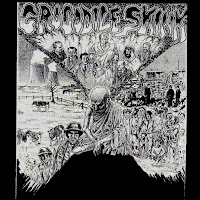 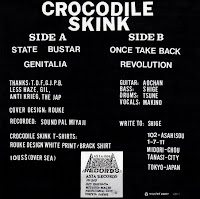 Yeah, me too want to know more of the band. But alas, not much can be grasped by searching English language internet nor from asking people on e.g. Burning Japan.

Admittedly on EXTREMELY shaky grounds I speculated whether the singer of Crocodile Skink went on to sing in another band (same first names) but that is so ridiculous speculation that I shan't repeat what the other band is...

Anyway, I guess you could also add that the photo of the singer from Inferno Punx photozine has been used for numerous flyers, zines etc. You may say it is very iconic what with the singer's black crust dress and patches and his body language as well...

Look forward to seeing the No Security split posted....

Ohh i remember downloading the Toyko Crusties comp. from here a while back. That was a really great comp. I remember Battle of Disarm was on there too.

The most information i have found on this band was on profane existence- http://www.profaneexistence.net/viewtopic.php?t=11100&highlight=&sid=f81fab8c997cf0e7203fbbd4274e617b

you could maybe ask there?

thanks Stewart, i had already seen this discussion before i post this here but since many people from Japan
enter here i hope someone will know something more

thanks Slobo, i didn't remember this

Genitalia is positively "Cliff from Driller Killer period Anti Cimex" inspired, I was going to suggest "or simply inspried by Driller Killer" but this single came out one year before Driller Killer started and 2 years before the first LP...