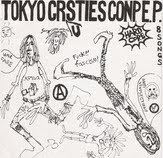 Here is a compilation that delivers some great acts of noise coming from the Land of the Rising Sun: Tokyo Crusties is a 7" released in 1994 by DIY Records and includes Crocodile Skink, Battle of Disarm, Abraham Cross and Collapse Society.
The record comes in two gatefold pieces and includes lyrics and address infos of bands, DIY Records is a label run by Asada, vocalist of Battle of Disarm. My misunderstanding about a Tokyo Crusties vol2 caused by rumors on web was finally cleared when curious guy set things right: There is not any vo2 but Meaningful Consolidation 2x7" (also released by DIY Rec.s and a bunch of other labels), chronologically or because of the label involved could be considered as a vol2
Check this blog for more details about Crocodile Skink and Battle of Disarm, I know only a few about Collapse Society:they had a demo(1993) and a st/ 7" (on Overthrow Rec.s) which came with two different color covers (white and yellow) and there was a clear vinyl version of it. Abraham Cross were from Tokyo, "they began in the mid-90s as a relatively typical, though highly accurate, Tokyo crust imitator of England’s Sore Throat, Extreme Noise Terror, and Doom; today, they combine noisy crust with a krautrock influence to create a hybrid sound quite unlike any other band I have heard. “Message from Forever pt. 1” is their most meandering excursion"(from Shit-Fi.com)... Their discography includes a demo, Peace can't Combine (lp & cd), End of Time tape (Black Konflik Rec.s) and split w/ Struggle for Pride (2003,Paank Levyt), (i dont know if they have released any other shit, any help is appreciated) and appeared in several compilations (Meaningful Consolidation, Crust Night cd (2002,Tribal War Asia Rec.s), Terro-Rhythm, Tokyo Sound System I & II (2002-05,New Smell), Fuck Religion, Fuck War, Fuck The Lot Of Jesus! tape and also appeared in All Crusties Spending Lound Night dvd(2002).
Each band delivers two tracks, Abraham Cross bring the heavier stuff, they sound like a Doom/Extreme Noise Terror blending ( these tracks appear in Peace can't Combine along with the tracks from Meaningful Consolidation and other recordings from early '90's) though Battle of Disarm is the band that have copied the riff of Relief in Murderer is Hero, Crocodile Skink are just fine, Collapse Society come last for my taste but not bad at all..
i said enough.. go get it! 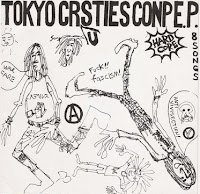 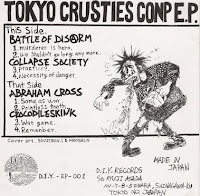 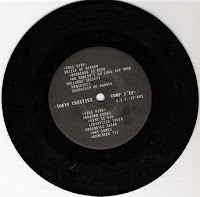 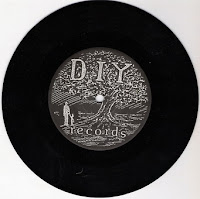 fuck yeah...
some more Batlle of disarm is all we need (i guess)
terryfic choice and once more you're a Killer!!!

thanks, but wheres the dl link to the songs?

this link and links from all old posts were removed because some appeared as dead from time to time and didn't know which is active and which is dead, i didn't care to fix the problem cos seems none cares about old stuff, links were removed since last November and almost after 100 days you are the first person who asks about it,just tell me if you want badly this 7" and i will re-upload it or bring the old link back if is still active.

ok, thanks, i can find the songs elsewhere, thanks for the scans.