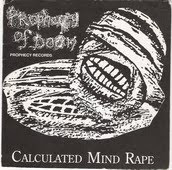 Another piece of grinding crusty noise and a piece of vinyl coming from late '80's: Calculate Mind Rape was posted in summer of 2007 and here is again in fresh new rip and scans for all you audiophiles.
I need to rant some shit, actually to copy-paste some from the old post and add some new, so let's go:
The grindcore freaks Prophecy of Doom were from Tewkesbury, Gloucestershire,UK. They started as Domination Factor and later became Prophecy of Doom. As Domination Factor they recorded the "Dominated till death" demo in 1987 and they had a live @ Mermaid in Brum (August '87). I have never heard anything of Domination Factor (probably they were a rotten noise band too) so if anyone of you UK old punks out there know any further info just drop a line
The first PoD recorded material was the "Insanity reigns supreme" demo(1988) and was followed by "Calculated mind rape and "Acknowledge the confusion master" lp in 1990 (Peaceville/Deaf), the Peel Sessions ep (1990,Strange Fruit), "Until the again 7" (Afterworld Records,1991, incl. three live recordings),the Second Peel Sessions (link is from Damaging Noise, thanx Sean!), the "Matrix" lp (1992,Metalcore Records) and "Ego-Death grind" demo (1996) which was recently released by Agipunk in seven inch under the title "Tri-battle thought-form engagement"
"Calculated mind rape" was the first vinyl release of PoD, it came out back in 1989 on Prophecy Records and its a two track piece of heavy as hell brutality with many tempo changes from mid paced to faster and back again,grinding guitars with heavy thrashing riffs, sludgy bass and the way grindcore should sound far from gore cliches and deathgrind bullshit, imagine Carcass without the blastbeats and you got PoD. Did i say grindcore? well, the production is a little sloppy, guitar is harsh and crunchy, vocals are unbelievably brutal but if the sound quality was a little better/cleaner and Shrew's singing was human and not these animal grunts, this would be another piece of Crust.
Both tracks appear in "Acknowledge the confusion master" lp in different recordings,(Hybrid thought is about a minute longer), Shrew (Vox) and Shrub (later on guitar) are now in drunk crusties Alehammer along with Scoot (Hellkrusher / Extinction of Mankind). According to Metal Archives, Dean the guy who played drums in "Calculate..." committed suicide in 2002...
watch them here and here 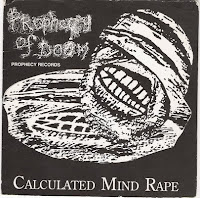 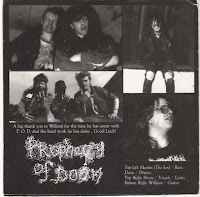 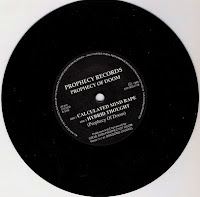 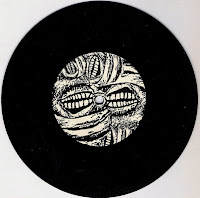 oh man, the "Acknowledge the Confusion Master" album is so amazing - I haven't heard this ep though. Thanks!

I've only heard the peel sessions from this band. Thanks for this for sure.

Also, just discovered this blog this week and I can't stop reading it. I get a total hard on for old crust, hardcore, grind, and powerviolence 7" so you can imagine my elation. It's always the first thing I look for at the record shop.

thanx Autonocuous, i hope you will find some interesting shit here.
cheers