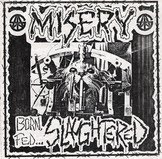 Misery was the answer beyond the ocean to the crust and stenchcore anthems from the punk crust wastelands of United Kingdom back in the days where the genre was in its beginning. Misery's history is more or less widely known and you can find a nice story in their myspace with many details. After a demo tape and some line up changes the band released Born Fed..Slaughtered in 1989 on their own label AYF (Anarchist Youth Federation) Records. The cover was folded and there were two tracks on the vinyl bringing brutal stenching riffs,actually this was going to be a 4 track ep but finally came out as 2 track because of some pressing problems. There is a insert with 4 track lyrics sheet along with another sheet with the lyrics of the two tracks of ep and some line notes of members about this mess. (the two outtakes finally appeared in the Blindead ep), and the typical crust fashion of misprinting continues on vinyl label:it says 33 but must be played on 45 rpm. Only 600 copies were made and the whole thing was done with the help of Felix Havoc.
One year later this was released by Discarded Records and Under Siege Records as a three track ep (Total Destruction was added on side A to join the eponymous track while Falling of Darkness was on flip side),hopefully it will be posted in the next months.Discarded Records is the label behind the alternate sleeve edition of Doom's Police Bastard

Born Fed.. was posted in the first days of this blog in poor quality and no scans so here is the real deal, and a little strange shit that happened a few years ago: it was after a rally and i was standing in the end of the street watching the protesters leaving the place, frown, bad and ugly and lost in my thoughts, then some people who were carrying a banner came closer, the banner was a kind of paper-wall,it was symbolically the capitalism and on each brick it was written some of capitalism good things such as exploitation, poverty, ruling class parasites, third world genocide etc. then the wind started blowing,some paper bricks left the wall and one of these after a strange flight came and landed straight into my face, i grabbed it and read it:"misery". oh shit!i tried to hide it but it was too late:i heard my friends laughing and one of them said "hey,even the wind known that you are Captain Misery"!!!
I feel nice to see you guys even if things are a little harder than the last months, more shit came, more misery to face, cheers
Tracks:
01:Born,fed..slaughtered
02:Falling of darkness 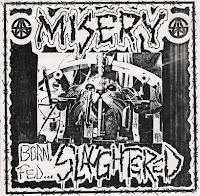 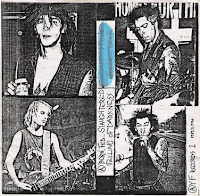 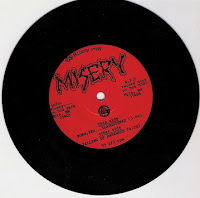 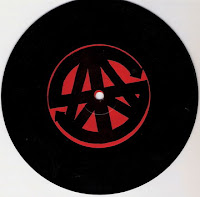 What I meant to say is that this is one of my favourite Misery recordings ever.

good to have you back, mate

indeed. you have been missed.

Shit happens, but beer, spliff, punk and friends are always there for you!

thanks for linking up MNPunk, i have added you in linklist some months ago