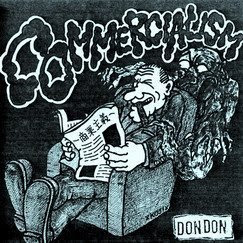 D.o.n.D.on. were a respective member of the second wave of bands that rose the flag of punk in Japan in mid/late 80's. You have met them before in their split w Scraps so there is no need for any rant about their history. Bastard, GISM, Asbestos, Judgement and Poison Arts are some bands that D.o.n.D.o.n members were involved, Iizawa (bassist) does backing vocals in the third and newest World Burns To Death lp, "Graveyard of Utopia".

Commercialism" was the second D.o.n.D.o.n. ep, it was released in 1990 on Highly Collectable Records, a label run by Dropdead members. Six tracks, 14:30" total running time and grey vinyl.
Midpaced tempos that sometimes speed on, decent production and harsh vocals (the japanese way). I dont know how many copies of grey were made and if there was a classic black vinyl version is a question that should be answered by some of you out there who happen to know, (the number of 250 copies of gray appears as info in a trade list on How's Your Edge? )
Tracks:
01:Nuclear reek
02:Commercialism
03:Essentional qualities
04:Braggart
05:Satisfy
06:Factory 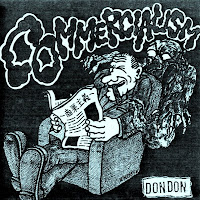 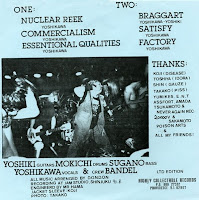 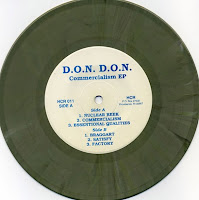 ohh very cool, thanks man great suff here!
i was just hinking about when the next post would be and then bam! new feeds!

I had only a few tracks of this band recorded off John Peel back in the day. I could never find anything by them and latelyI have heard some stuff on compilations and now you little darling have given me a birthday treat.

No not sessions, just off a record that Peely played.

Awesome, absolutely fucking awesome. Everyone should grab the LP re-issue out on http://www.schizophrenicrex.com/ ltd to 700 and just about all gone. Great post on a great blog as always. Cheers.

black version: https://www.discogs.com/DONDON-Commercialism/release/9718154
i own it ;)