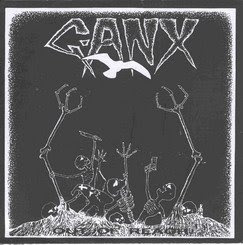 Out of reach is the third of the three G-ANX ep's that came out in early 90's, it was released in 1992 after "Far out"(1989,Finn Records) and "Masterpiece"(1990,ElderBerry Records).
Everyone who's familiar with Counterblast's industrial-ish crust will find the first seeds of this subgenre here in the slower parts with some clean melody lines, the use of keyboards and the known from the other ep's intros whilst the rest stuff is blasting hardcore. "the beast with in" in side a with the clean guitar melodies and "In harmony" in b side with the midpaced tempo and the long atmospheric intro, are two examples for the future pathway of these guys
G-ANX(it is pronounced like "yonks and not "gee-anks")had a long time history behind them as they were formed in early 80's in Huskvarna, Sweden as Gravida Anker (Pregnant Ducks) and apart from these three ep' s they recorded two demo tapes in mid 80's (demo # 1(9186) and demo #2(1988)) and a split ep with Filthy Christians (1988,Gore Core Records) In 1993 Sound Pollution Records released "Flashbacks" cd including their vinyl recorded material plus two tracks previously unreleased.The core of band formed Counterblast
"Out of reach" was released in 1992 by ElderBerry Records,(ElderBerry was run by some G-ANX/Counterblast menbers) and was supposed to be LP but some tapes were erased and the band had no will to replace the missing stuff. There must be a re-release in early 90's in US and recently in 2005 Rigid Records put it out again but looks like no copies are available anymore.
Demo links are taken from Masken's Blogg as Fuck,an amazing blog for the Swedish scene(written in Swedish)
Tracklist:
1: Victims of ignorance
2: The beast with in
3: Toilets
4: In harmony 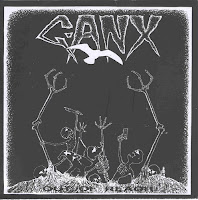 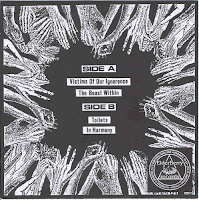 these guys were cool.nice record and all their releases were great
check this unofficial G-ANX myspace there 's a notice about a double vinyl version of Flashbacks with some extra tracks on Threat From the Past Records

great . such a crazy mix of styles and still so raging a hardcore band. It's interesting that G-anx didn't come off "progressive" or post whatever since the thrash was so raw. Love them!

One of my top-favorite bands since I first heard them back in the early 1990s.

here's a not from Women In Heavy Music:
Carl of I Love a Parade, whose old band His Hero is Gone once toured with someone who played in G-ANX, reports that the name (being Swedish) is pronounced more like "yonks" than like "gee-anks" or "ganks." Also it apparently means "pregnant duck," but I'm a little dubiouser on that one.

no matter if yonks of gee-anx they ruled!!!!

What a great blog you have here. I feel like 20 years younger. Some day i will go through my 7"s and rip some goodies. I still have like 500-600 crust 7"s. Lots of stuff from South America and Japan too. But before i do this, i'll have to stop the drinkin' and druggin' - lol.