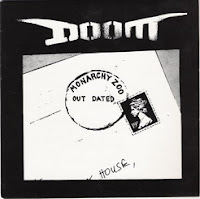 This must have been posted elsewhere before and probably will be again in the future but its cool, its Doom so what's wrong?
Monarchy Zoo is the result of some Doom recordings in Sunlight Studios in Stockholm Sweden back in 1996. During their Swedish tour, Doom entered the studio and recorded this shit in August of 1996 with famous Thomas Skogberg handling producer's duties. This was released by Vinyl Japan in seven inch vinyl, there was also a cdep version of it
Not their best ep (Police bastard is the best work for most Doom fans but i think Hail to Sweden stands equal) but not bad at all and a bit different comparing to their old stuff as they sound somehow different. The package is pretty simple, there is not inside folder to protect the vinyl from dust(or my copy arrived to me with naked vinyl cos the inner folder lost the way home...). Lyrics are printed on the back cover, i really enjoyed the humorous lyrics of the eponymous track.There are some infos about the recording and some problems the band had to solve before the tour and band's last line up changes.
As conclusion and comparing this ep with other Doom records of this period, this is a good Doom record in the levels of split 10" w Cress and much better than World of Shit, the old flames are gone but a fire still burns here. A track from Monarchy zoo( Dig your grave) appears in "Pissed, robbed and twatted" live 7"
Tracklist:
1: Monarchy zoo
2: Rainning napalm
3: Want no need
4: Dig your grave
5: Doomed 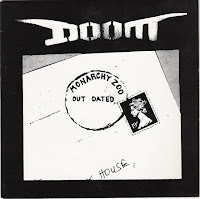 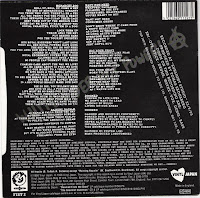 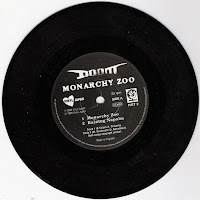 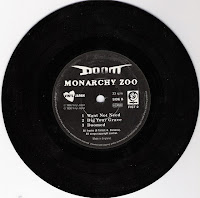 I'll have to agreeably disagree, their peel sessions is where it's at!

Hi Sean
well,yes,not any doubt,Peel sessions are great and the old Doom stuff as well,i was talking for Police Bastard comparing Monarchy zoo to the other Doom ep's and i mentioned the Cress/Doom because it was released in this period, maybe its a silly comparisson so fuck it

Only my opinion.. Cheers and take care.. Really thanx for all mp3s, good job!!

just stumbled over this one at my local record shop. a really cool 7"!!!

btw: would you mind a link exchange?