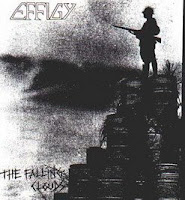 This is the split Effigy/Havaistys-The falling clouds/Laki ja Evankeliumi(eeh.. do i spell it right??), released in 2002 on Wispers in the Darkness Records.
Effigy were worhsipers of Amebix and Axegrinder from . Here they contribute two tracks of their metallic mid paced crust with raw and thick production, metal edged riffs, brutal growling vocals and a feeling of 80's metallic crust of the mentioned bands above. Effigy appear in All Crusties Spending Loud Night DVD(2002) and their discography includes Evil fragements ep (1999 on Dark Age,re-released in 2005 as cd by Hardcore Kitchen with four live bonus tracks),a split 7" with Aparat (2000,Forest Records), From hell 7"(a.k.a Grinding Metal Massacre,2003 on Crust War)., a split 10"/CD with Hellshock, (2004,Wicked Witch, cd version on Crimes Against Humanity) and finally in 2007 the "Apocalyptic Nightmare Continues" split tape with Abigail on Black Konflik Records. There is also the "Darkest four" split tape
Havaistys included Finnish and Japanese members involved with Forca Macabra, Conclude and Rythmihairo. Their hardcore has some old school thrash influences in a d-beat mixing with shouting vocals, fast and slower rhythms and some thrash parts here and there. The production is raw and an old school feeling is hiding behind the guitar works.Good stuff though..
Tracklist:
Effigy side:
1. Shattered hell
2. Swear to god
Havaistys side:
3. Kaikki on jo havaisty
4. Helvetin myrsky 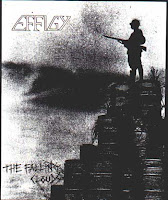 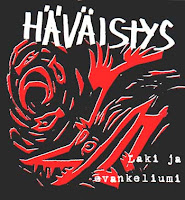 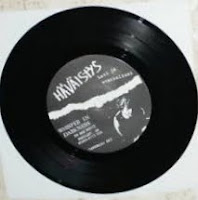 i loved the first effigy record u put up, cant wait to hear this one!

thanks, i'm downloading it right now. This is pretty damn good blog, i've found so many new bands thru this.
Oh, and you spelled it almost correctly: it's supposed to be Laki ja Evankeliumi and the track 4 is Helvetin Myrsky. ;)

Better than the first one!
Ludilo!!!Crsman81

Thanx a lot 7" !! With these I've completed my Effigy discography, a 72' cd . Even when they are the farthest from the "crust" style if we compare them with the bands they share stages with; Disclose-Framtid-etc. Nonetheless their more "traditional" approach to thrashcore with death metal vocals makes them my all times fav jap band by FAR. Love these people and wish they put out a full-lenght cd of their very own someday soon despite the fact that their last recording was the ALL CRUSTIES SPENDING LOUD NIGHT DVD. Do you happen to know whether they're still active or not ?

Hi Martin, gracias por da commente :), i remember an old comment of yours some months ago, nice to see you again, cheers!
i think Effigy are still active: in 2007 they put out the "Apocalyptic Nightmare Continues" split tape with Abigail on Black Konflik Records,its a live recording,(they cover Arise of Amebix there) but i dont know the year this was recorded..(no i don't have it..)
Well, "All crusties.." dvd came out in 2002, "From hell" was released in 2003 and the 10" split with Hellshock in 2004
"From hell" was supposed to be a split with Zoe, thats why both bands have a "From hell" 7"

you said you have their complete discography,that means you have the first Japanese tribute to Amebix and "No hesitation to resist" 10", both comp's are great.

there is a band called C.O.S.A.(Cache of Strategic Arms) with members of Effigy and Reality Crisis but never heard something of them

and a bit more:
in Amebix tribute they cover Arise and Lagractyl and in
"No hesitation to resist" 10" they contribute "In destructive of the earth", a track that do not appear in any other Effigy release.

its is right there!

Any idea where I can download the Effigy/Abigail split? I've been dying to hear that one but I can't find it anywhere!

sorry,i have no idea about any dnld link of this tape.