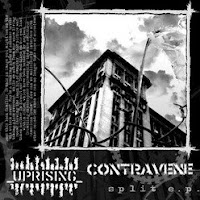 Sometimes there are bands that getting better and better in each record they release by adding new elements.searching mew paths.getting better as musicians and the same time keeping the spirit and their ideals. Contravene was one of this kind of bands and included the people who run Catchphraze Records. From Forever Struggle demo tape to their swan song split w Uprising they were getting better and better.Here they deliver one track,nearly seven minutes long,lyrically dealing with oil industries and music wise an excellent peace punk anthem with crusty feeling, starting with an acoustic intro and ending with a sing along part.
Uprising were from Michigan and sound the way Contravene did in their early days: A crusty rough edged Contravene version, they deliver two tracks with some melodies in the metallic riffs blending Nausea and Flux of Pink Indians. Apart from this split they released As Long As There Is A Profit To Be Made 7"(Acts of Attrition/Incendiary Sound Records) and a demo cdr as well.
An insert is included with excellent lyrics that worth to sit down and read, explanation etc, the idea about the split was after Contravene played in Detroit with Uprising in summer of '04. First press 1.000 copies of black and 200 of red vinyl. Catchphraze has some copies,check it here, is more than worth to get it
Tracklist:
Contravene:
1. The lies they want us to shallowUprising:
2. Paralized by Fear
3. Killing for profit 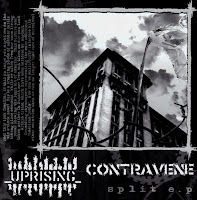 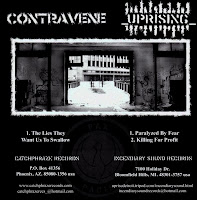 If anyone wants this EP I don't really listen to this band anymore, and I'd be willing to trade it. Email nauseapunk52@yahoo.com

Hey man, I really like what you do here. Great blog. I'm Nate from Uprising, just want to encourage you to post Killing For Profit too. If you want I have a MP3 of the song I can send you. Please contact me at uprisedetroit@gmail.com if you're interested.

Contravene are, to this day, some of the nicest most genuinely awesome people I have ever had the pleasure of knowing. Glad to know there are people out there who dig the split.

Uprising has a 7 inch but it was never really well distributed. I have several hundred copies available if anyone wants them just contact me at uprisedetroit@gmail.com

Hi Nate! thanks for your words, its nice to see band members appreciating what we do.
We would like to post a Uprising vinyl but i don't have the 7" and i don't know if Whipsy has it. (are you talking about "As Long As There's A Profit To Be Made"? don't you? i dont know any other Uprising 7"...

though i have posted an Uprising demo cd in my second blog www.crust-demos.blogspot.com/

I'd be happy to send you one, I have like 500 of those bad boys cluttering up my closet. email me and I'll send that out this week