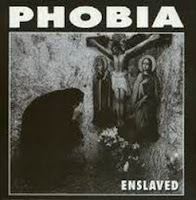 Brutal grindcore from Orange County California: Phobia was formed in 1990 and released several full lenghts and ep's, they have shared the stage with bands such as Detestation, Napalm Death, Assuck and many others.
Enslaved was released by Slap a Ham Records in 1997 and its a piece of old school grindcore that unleashes brutality with thick guitars,blistering riffs with nice breaks, distorted bass, fast bashing and blastbeating drums with some slower parts, deep low growling and high shrieking vocals and lyrics on socio-political issues. Some death metal and hardcore elements here and there but not to much metal as their later stuff, the sound production is good for this five trax sick as hell stuff. 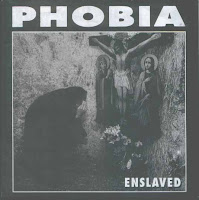