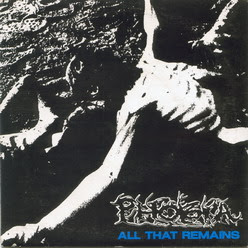 All that remains ep, was the first vinyl release of Californian anarcho grinders Phobia back in 1990 on Relapse Records. Four tracks of old school grindcore, noisy riffs and over-ruling guitars, chaotic distorted vocals, all out political lyrics, distorted bass and mid tempos with a few insane chaotic blasts. An insert with lyrics texts and special thanks were included, The production is raw and noisy but the band keeps aggression and brutality on high levels.
1. Intro - Emptiness
2. All that remains
3. Fear
4. Internal rot 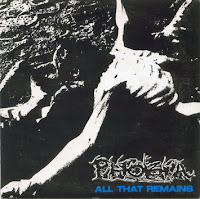 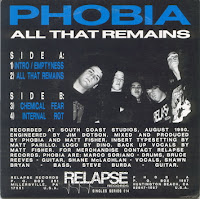 For the guy who requested Axiom-Impaled by chaos 7": this is already posted on Crustcracker
sorry people, there will be not any link for this since Relapse joined RIAA..
edit:By the time this was posted (July 07), a Phobia/Extinction of Mankind split was supposed to be released by Profane Existence. One year later in May '08, Moshpit Tragedy announces the same split,
edit:in May '09 nothing happened yet....
edit:its May '10, nothing yet
edit:autumn '10, ok it finally was released :)
Posted by 7inchcrust at 7/03/2007

...Hi, you want to say the split LP of PHOBIA with RESIST & EXIST in P.E., right??
Good job, really thanx, I donwloaded the japanese old 7" that you have in your blog and another rare things. Really amazing information.
cheers + take care
(A)(E)(V)

Hi Johnny, i mean a new split with EOM ,check Phobia's myspace: www.myspace.com/phobiagrindcore
not much infos yet and absolutely nothing on EOM's myspace but according to Phobia's myspace, "WE WILL BE RECORDING A SPLIT WITH THE ALMIGHTY EXTINCTION OF MANKIND. IT WILL BE RELEASED ON PROFANE EXISTENCE...RECORDING START IN MID JUNE!!" posted on May 02, 2007

ahhh WOW... interesting !!! thanx for this news.. We are waiting that!!! cheers!!!
(A)(E)(V)
pd- maybe you have somes rares agathocles vinils ? or maybe terrorizer vinils ?.., if you can put in this site some abaut that will be good !!!

Hello there! My name's George and I'm from Greece. Well, I found your blog and I was totally surprised to have found another person who gives such a shit about music. I am a music freak too. I collect from lots of kinds of music albums and I just wanted to say thanx for that offer man. I really could die when I saw this collection. I don't know, where else to contact you, since I don't actually know how blogs work, but, the one thing I could surely do, is send you in some way the "Olethros-st 7" (Greece, hc , early 90's)" 7inch you have in your wanted list. My e-mail's georgeatomo@gmail.com. Maybe when you'd see my comment you could contact and then I could send it to you. Cheers man and thanx again bro, you really got a Hell of a collection there ;)

Hi George! that sounds great! i will send you a mail as soon as i can for more, its easy to send it if you have an mp3 rip of it.Thanks!
Johnny this EOM/Phobia split seems to be an awesome record. i can't believe that, no any Agathocles until now.. lets grind some AG!
There is an old tour 7" of Abstain
from 1999,that's fucken rare, i dont have it though...
About Terrorizer: there must be an old st 7" as well another 7" (Re-Animating the Dead ep), check here for more:
www.terrorizergrindcore.com/releases.htm
rad stuff...

the false blog massacre is back

This cover is disgusting. It's really pathetic and insulting to see bands using artwork that is far too powerful for them to add anything to its meaning or place it in any context that can justify its use as anything other than exploitation and sensationalism, the cheap use of real human suffering to sell records by and for the residents of peaceful, prosperous suburbs in modern democracies.