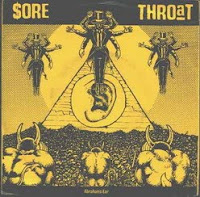 Another piece of rotting sound coming from the beginning of '90's: Abraham ears ep is the second Sore Throat testament on seven inches and was released by Ecocentric Records in 1987 sometime in early '90's (even Ecocentric site has no year of release..wtf?) and includes Aural Butchery demo from 1987 on A side and a live set at The Mermaid, Birmingham,1987 on side B, the gig was a part of their Spontaneous Musical Combustion Tour.
i always had this sick thought this is a bootleg but ts an official release: Ecocentric printed1000 copies that included several inserts. And as you probably think, this is grinding noise-core ala Sore Throat:Side A tracks are countless (27 tracks) and "connected" each other with a repeating and haunting background noise that's no sound effect but some studio noise caused by equipment gears due the recording of Aural Butchery or something like that. The sound quality is simply... you know.. Sore Throat. Side b is a 6 minutes live Sore Throat feast of cider and noise in 13/06/1987, Birmingham, The cover artowork is nice, smart and caustic. This is a cult record for noise worshipers.. 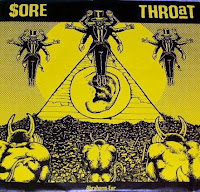 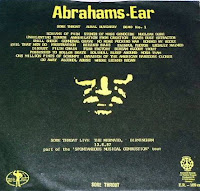 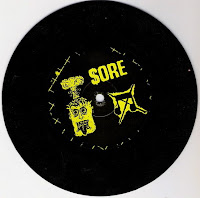 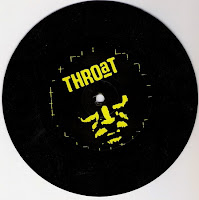 Fuck dawg you've got taste. I think this ep was released mid-90s though?

Thanks Sean, yes its my mistake, it could nt be 1987 in any case, Aural butchery and the live were recorded in 1987, this was put out later,i remember now i ve red somewhere it was 1992 or 93 but still not quite sure about the year.
thanks... :)

Great stuff, but even better are Saw Throat a side project. Can anyone tell me was there an actual band "Rat Tom & Stick"? John Peel played some songs announcing them as such. Sounds very ENTish.

that was the orig line-up to EXCREMENT OF WAR.

the link doesn't seem to work. Could you please fix it? THANX!

Link is fixed, thanks for the report and apologize for being too late to fix it :)