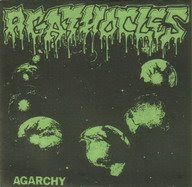 We are getting 7inchgrind here since last post are grind band....
There is no need to say anything about AG, everybody knows them, Agarchy was recorded in Nightingale Studios, Antwerpen, Belgium and was released by the Polish label Flabby Records (#001) in summer of 1991, 500 copies were made for the black vinyl-white/black sleeve and the green sleeve-red wax vinyl edition. As it is expected, music wise it delivers four tracks for 9 minutes of noisy old school grindcore, some metal influences appear here and there and some hardcore riffs as well. Some of the tracks were rerecorded and appeared in their later releases, AG maniacs maybe discovered Gorgonized Dorks behind the grinding noise of eponymous track ..
More infos & details about the band:
http://www.agathocles.com/
http://www.geocities.com/SunsetStrip/Palms/1783/
http://www.myspace.com/agathocles12
http://www.metal-archives.com/band.php?id=2649 (discography list)
Tracklist:
1. The truth begins where man stops to think
2. Sentimental hypocrisy
3. Kill your fucking idols
4. Agarchy 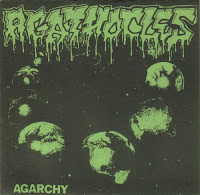 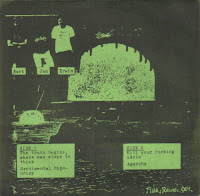 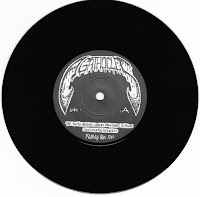 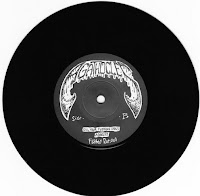 I wanted to know if anyone knows, how is it that people record the music off of vynil into mp3?

wow, thanx to 7inchcrust for upload the agathocles vinil..!!.. what lenguage you speak in this last lines?, !!
In answer to alex.k, you need a special cabble (music machine to computer) and some wav programm. this is really easy.
cheers + take care
(A)(E)(V)

To record vinyl to mp3 all you really need is a simple RCA to 1/8"(3.5mm) adapter cable. The RCA side plugs into the output of your stereo, the 1/8" side (looks like a headphone jack) goes into the line-in on the back of your computer. Then you need a program to record from line in to WAV, I would suggest Audacity, and then convert the WAV to Mp3 with whatever program you chose, like LAME.

Yup, yup, yup. Agothocles, or however it may be pronounced, how about Ago-tacos. x-D Hey that info up there can be useful to me(how come I never asked), I got some 7" I wanted to convert to mp3.

great blog, fine art! greetings from Chile (South America).
you should include some splits of spanish-speaking bands like MIGRA VIOLENTA, LOS CRUDOS, @PATIA-NO, SIN DIOS. I can help..
PS: Could you upload some music from RESIST AND EXIST (just heard 'em and they're really good shite).

Eduardo, i ll see what i can do with @patia No, Sin Dios and Resist and Exist. great bands.. you can also check http://ioriska.blogspot.com/ for more spanish-speaking bands
Johny this is the language of drunk crusties hahahahha.
Ago-tacos? cool!

Agathocles-Agarchy 7" was originally released on Flabby Records (Poland), black wax with a big hole. Malarie Records (Czech) was rereleased it about 3 or 4 years later on red wax.

For collectors and AGx fans in general, the 'Fascination Of Mutilation' live flexi disc 7" ep I financed in 1990 through BUTTFACE PDS is available again!

I have mailed Jan the last 65 copies I have been carrying around the USA for almost 20 years. Don't worry - it has nothing/and had nothing to do with Rigid Rippoff Records from Tampa - his label was on the release and he did nothing BUT hide my orders and spend the money on cocaine.

So write to Jan and grab a copy if interested, I redid the layout slightly to omit anyone maybe making a mistake of sending money to Rigid Recs - you don't wanna do that!