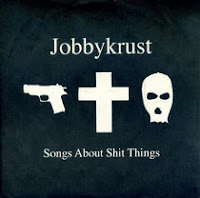 This is a forgotten and hard to find gem and brigs two obscure acts of Irish scene: Jobbykrust and Blurred Vision share this shit titled A Small Piece Of War/Songs About Shit Things split 7'' which was released in 1994 by Grinding Madness and Castafiore Vox.
First off i need to say that this rip is not mine, i found it on the web and since its about a rare shit and blah blah and blah again here it is for you, many thanks to the guy who ripped and uploaded it.
I don't know anyshit about Blurred Vision (split's inside cover says that they called it day in 1993) but here are some things about Jobbykrust: There is a connection with Dagda, they recorded two demo tapes back in 1992 (Naivity or Hope and We Starve the Starving) and some of these tracks appeared in the split lp w Wisigoth from Canada in 2000(released by Funai Records), apart from the split w Blurred Vision they had split releases with Viktors Hofnarren from France (1996) and Blofeld from Germany (1997) and 'The descent of man" lp (1997, Funai). You can download their entire discography from Peace Not Profit, (but lyrics, playlist and band's history pdf links seem to have a problem)
Blurred Vision bring two tracks (plus one intro) of screamed emotional slow/mid-paced hardcore while Jobbykrust contribute four songs with "the unrelenting mucous flow of Pink Turds in Space, the common sense politics of Disaffect and Sedition, the fugitive taxonomy of Scatha, the tasteful, delicate flourishes of The Dagda". Marc of Fugitive Equilibrium wrote this and describes perfectly the whole shit, btw Marc posted the Jobbykrust/Viktors Hofnarren split lp some time ago. And as for the labels, Grinding Madness stands behind some grindcore releases (Agathocles, Cripple Bastards etc (check here), Dis is Getting Pathetic of Active Minds and was among the labels involved in The Lunatics have taken over the asylum flexi 7".
Here ends the little rant, please write some lines if you know anything about Blurred Vision, thanks again to the unknown ripper! 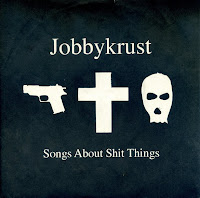 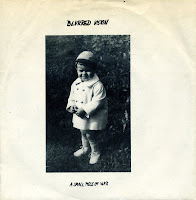 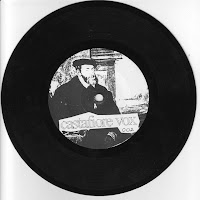 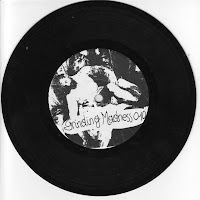 Damn! Thanks so much for posting this. A very raw outing for both bands, but it's great to finally hear it in its complete glory!

thanks go to the guy who ripped this, cheers!

Thanx to you also for sharing all this good music with good people... Jobbykrust were (and still are) one of my favourite crust bands around europe from the late nineties... Although this split is incredible their last songs on their 12" The Descent Of Man is to me one of the best crust records from that time...

I released this record ages ago. Blurred Vision used to be a West-German band, but besides that don't remember much... Boezie

Hi Boezie,thanks for this little information,i always believed that BV were from Ireland or UK.thanks anyway!cheers!

If you're searching for the ultimate bitcoin exchanger, then you should know Coinbase.

Claim faucet satoshis over at Easy Bitcoin. 11 to 33 satoshis per 10 mins.