Active Minds-The lunatics have taken over the asylum 7" (flexi)

There is no much left to say about these punks, they are active since 1987 and in 2009 they keep playing gigs and releasing records, web is full of resources about them and more or less you probably have listened to their tunes before so there is no need to say anything about them or their music. The lunatics... is a flexi released in 1994 on a bunch of labels including Loony Tunes (their own label), Per Koro, DIY Rec.s (singer of Battle of Disarm 's own label), Nikt Nic Nie Wie Rec.s and many others. It comes in a news paper like cover including lyrics sheets in several languages: polish, Japanese, Spanish etc, actually i don't know if these writings are the lyrics or the translation of lyrics explanation that is included in English but in any case its worth to check.
Loony Tunes was Active Minds own label, apart from their records they released records from several other bands including Equilibrium 7" of Atavistic, Totalitar's Luftslott 7" and Satanic Malfaction's I 've had just had about it all i can take
Thats the short short rant. Go get it (all scans included), check also Protest zine for an old interview from 1994 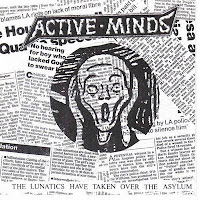 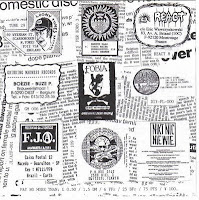 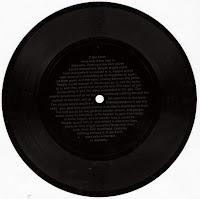 I remember getting this record from Poland when it was released (from Trujaca Fala if I remember right) with some other stuff and it was so ridiculously cheap that I believed it was some mistake in price list. Active Minds always have a special place for me. Gonna put their last CD to play right now.

The epitome of DIY hardcore bands. Think that even still they refuse to put out CDs. I pretty much have everything by them that I could ever find, but it's good to see them posted here. Might even surprise you Billy and here in the near future post some other stuff from the Loony Tunes label. Thanx as always Billy.

Justin, looks like they fall from grace: there is a cd version of It's perfectly obvious that this system doesn't work, just check their myspace:
http://www.myspace.com/activemindspunk.
thanks for the comments, once again we became a ghost town here.. :(

Such a great record and label. Thanks for posting. btw its Looney Tunes that only does vinyl and the new CD was released through Active Distribution.

thank for correcting me Roc, it says so in their myspace, i should be more careful :/
cheers

A post very well done as always.
Good information in short, very good band and great album (I had not heard before).
Loony Tunes is a very interesting label with a lot of nice releases and high quality. I note also (along with that EP you name of Satanic Malfunction) the 7''from VI (Denmark) that I like. Also the Funeral Oration LP "The More We Know".

Thanks for your post and thanks for the insert with the spanish lirics :)