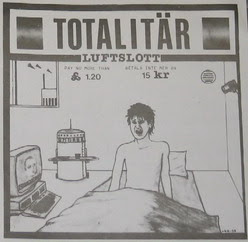 A lond standing Swedish hardcore band with 20 years of history and many many releases in their discography. Totalitär started back in 1985 and Luftslott 7" is their second release (after Multinationella Mordare 7" (1987), there is also a 1986 demo recording before Luftslott, that was released in 1991 as 7". Released on Loony Tunes Records in 1987, including a paper gatefold sleeve with lyrics and infos. Luftslott is a six track attack of powerful and energetic hardcore, Discharge-ish riffs, fast drums and shouting vocals, all in good sound production. Some hard rock traces appear in Pappamerika-k hem that will get more in their next 7": Vand Dig Inte Om (Finn Records, 1989).D-beat as always but here the hard rock elements mixed with d-beat create a strange atmosphere but the result is good as Totalitär! A Missbrukarna cover is included. Nice ep!Totalitar seem to worship Discharge and stayed all these years to d-beat pathways despite the many line up changes. They have released about 10 7" and some lp/cd's including splits with Tragedy, Autoritar Disclose and Dismachine. 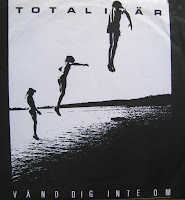 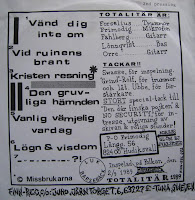 Cool gesture but really the credit for the Vand Dig Inte Om 7" rip is yours, not mine (and my posting-job was a complete write off lol - no info, not even the cover!)

But yeah, goddamnit. Luftslott contains some of the coolest D-beat interpretations I think - Dis-spazz-core? And it is vain I know but even the godamn covers are great!

I loved the inner for Vand Dig Inte Om - a white A4 with handdrawn lyrics and soem random scribbles!

Lots of other Totalitar uploaded today on my blog from the frequent visitor Maize.

And I just discovered that there is a Totalitar compilation with extra stuff from the sessions Luftslott + Vand dig inte om - HOW FUCKING AMAZING IS THAT?!!

Though, in the world of Mp3s it is uite possible that I already have these tracks / or have heard them already without knowing...anyway, that's one to buy I reckon.

Thanks for this by the way, it was the only single I failed to get hold of back in the day.

Here's the tarcks names in English by the way:

2. There is money to get

5. You, piss off (literally: "grab your arse" in Swedish idiom)

7. Go into the ditch (suppose it means: "be reckless")

I wonder how much of the quasi-intellectual / arty aspects of Totalitar can be grasped by non-Swedish speaking...?

Thanks Slobo, seems Only-in-it-for-the-music turns into a co-operation work as Maze keeps storming with many many posts,
This Totalitar compilation with extra stuff from the sessions Luftslott & Vand dig inte om is Jawbreaker? think
i ve seen it on Inerpunk still available.
Thanks again :) i never forget that you are one of the first bloggers who told a few good words about this blog and posted 7inchcrust on Total Fuzzy,
see ya around :)

And thanks for the english translation of track list.
i like these strange hard rock elements on Vand Dig Inte Om tracks, really nice stuff.
ok, lets go to Only-in-it-for-the-music.. to see what's new today :)

Great record, but not on Finnrec..